Have We Become Oblivious of 'Oblivious'?

Most speakers of English have forgotten the original meaning of 'oblivious.' Perhaps that's appropriate.

One of the eternal truths of any living language is that it will constantly add new words and new meanings to existing words. As the language grows it will also slough off old words and meanings. Sometimes this discarding will occur as the result of a simple mistake. The word fruition, for instance, rarely carries its original meaning of “the pleasurable use or possession of something”; once people began to mistakenly use the word to refer to bearing fruit, in the 19th century, the initial sense became less frequently employed. Other words will change meaning through a more gradual process, one in which the earlier meanings are slowly forgotten. Sometimes this gradual oblivion of a word’s earlier meaning can feel almost poetic, as is the case with oblivious. 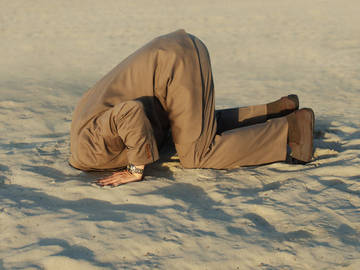 'Oblivious' originally meant "characterized by forgetfulness." Perhaps it's appropriate that most people are oblivious of this fact.

The first meaning of oblivious was “characterized by forgetfulness.” This word entered our language in the 15th century, coming from the Latin oblivisci (“to forget”), a root it shares with oblivion. The two most common senses of oblivion (“the fact or condition of not remembering” and “the condition or state of being forgotten or unknown”) are that word’s oldest ones; it is unclear why these old uses of oblivion have remained while the initial sense of oblivious is something that we have become, well, oblivious of.

The sense of oblivious meaning “lacking active conscious knowledge or awareness” began to be used in the middle of the 19th century. Although the "forgetful" sense may still be found in writing, it is far less commonly encountered today than the sense meaning "unaware."

She left us singing in the field, oblivious
to all but the ache of our own bent backs.
—Rita Dove, Persephone Abducted (from Mother Love) 1995

Such change in a language is natural, and we would never suggest that this progression should be reversed. However, we can point out to you that this early meaning of oblivious is not the only one of its ilk which appears to be departing from our collective lexical memory. There are a number of obli- words which we enter in our Unabridged Dictionary, and they are listed below, in order that you might savor them as they continue their journey towards obsolescence.

Oblivescence - an act or the process of forgetting

Society is not quite so terrible in its vengeance, but it is not the less certain to be avenged, or less restricted in its modes of execution. We may sum up its methods of vengeance under two heads—inertia and oblivescence.
—The Illustrated Review (London, England), Jul. 1871

O! my Maria! when you shall know the worst, what more shall I have to dread?———One Act oblivial, sweeps the Score for ever.
—Adolphus Bannac, The Apparition; or, Female Cavalier, 1756

….but in earnest I think, if the Gospel of God had no better lovers than such as would willingly obliviate all humane excellencies, 'twould be as slenderly loved, as Mr: B. loves Astrology….
—John Gadbury, Animal Cornutum, 1654.

Oblivionize - to relegate to oblivion