The following is an excerpt from Greek to Me by Mary Norris: 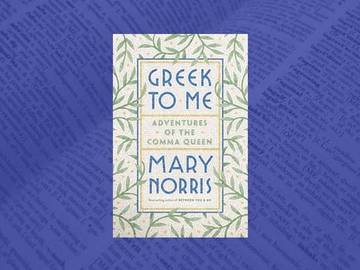 If you think Greek is hard to read now, you should have seen it when the Greeks were just starting out. They had only the capital letters—small letters were developed in the Middle Ages, to speed up writing and save on parchment. I am reluctant to refer to the small letters as "lowercase," because that term—as well as uppercase, for capital letters—comes from movable type and is anachronistic. Printers organized type into drawers, or cases, and kept the capitals in a higher case and reached down into a case below the upper case for the small letters; ergo lowercase. The uppercase and lowercase letters are also called by the Latinate terms majuscule and miniscule (major and minor).

Greeks did not put any spaces between the words, SOTHEREADERHADTOFIGUREOUTWHEREONEWORDLEFTOFFANDTHEOTHERBEGAN. At first, they wrote from right to left, like the Phoenicians (Hebrew is still written from right to left), but then they switched and wrote from left to right. This probably accounts for the backward orientation of some of the letters, like that aleph that went from a K to a backwards K before settling into alpha: A. For a while, they wrote in both directions: they might start out writing from left to right, and when they ran out of room they would work their way back from right to left, and then turn from left to right again. This manuscript style is called boustrophedon: bous (ox) + strophe (turn)—"as the ox turns," referring to the way an ox and plow go back and forth across a field. The metaphor suggests some deep connection between writing and the earth.

Spacing is still controversial. Though in modern typography it is generally agreed that one space after a period is enough, there are people who would sooner have their thumbs cut off than give up their right to double-space. Copy editors can guess the age of a writer by his or her typing habits. Those who double-space after a period went to college in the late sixties, early seventies, or earlier, and used a portable typewriter that was a gift from their parents. The New Yorker, in the days of hot type, put two spaces after a period, but when word processers came in, around 1994 AD, the first thing the editorial staff learned was "one space after a period." Wide spacing has its charms, not the least of which is that it creates jobs for people who remove the extra space.

A few other trends actually seem to be moving backward in the new millennium. For instance, audiobooks are a return to the oral tradition, and podcasts—talks, interviews, radio series—dispense with the written record completely. The codex—the book with turnable pages sewn between covers—was a great improvement over the scroll, but now, with publication online, we are back to scrolling again, which makes it hard to refer back to things. And vowels, the innovation of some god or genius, are now playfully omitted, as if they took up too much space. Someone might write "srsly" online (but not in print), creating a (sltly) humorous effect, or sign off with a distinctive "yrs" instead of the more formal "Yours." (But no one would dare write "sncrly yrs"—the sentiment is insincere without vowels.) There is a chain of restaurants called GRK, like an abbreviation for an airport, and no one would mistake it for Gork or Grak. People know that here they can get a Greek salad (or GRK sld). A banner outside a church building in New York that was converted into a nightclub called the Limelight, and later into a mall and then a gym, floats the letters MNSTR, leaving one to choose between "monster" and "minister," and giving no clue what goes on in the building anymore. Who among Phoenicians knew that their alphabet would one day triumph as a marketing gimmick?

Spacing is basically a negative form of punctuation, and it was a great leap forward. Actual marks in the text to help the reader were minimal—a raised dot or two were used to indicate a change of speaker in a play, and there are still arguments over whether a line in, say, the Prometheus belongs to Io or the chorus. Aristophanes of Byzantium gets the credit for using a system of dots to suggest pauses in speech. As Keith Houston recounts in Shady Characters, his book about the history of punctuation, the dot was placed in the middle of the line for a short pause (a comma), at the bottom of the line for a longer pause (a colon), and at the top for a full stop (the period). The modern Greek word for a period is teleía, related to the verb "to finish, complete, perfect." The comma comes from the Greek word komma, meaning something cut off, a segment. Its form did not solidify until the Renaissance, when printers made sumptuous new editions of Greek works. The comma was created to prevent confusion. Punctuation has always had the reader's welfare at heart. Ancient Greek has clues right in the words—inflections, tweaks to the spelling—that sometimes make punctuation unnecessary. But would it have killed them to put a period at the end of a sentence?

Sometimes, when I was studying Greek on New Yorker time, I'd mix up my alphabets and my dictionaries and open Webster's when I meant to consult Liddell and Scott—the Greek-English lexicon. I'd flip to the end and be surprised to see the letter Z instead of omega. What is that doing here? I'd wonder, before remembering that I was not in Athens, ancient or modern, but in midtown Manhattan, working on American English.

I don't mean to demean the letter Z. What would we do without it? The bees would not buzz, the zoo would close forever, the zigzag would lose its zing. The English alphabet seems to run out at the end in a way that the Greek alphabet does not. The letter Z has the feel of an afterthought, which is exactly what it was when the Romans, who had plucked it out of the Greek alphabet in the first place, restored it by pinning it back on at the end, like a tail on the alphabetum.

In the Greek alphabet, zeta comes sixth, between epsilon and eta. Its name follows the pattern of beta, and it kicks off the pleasing sequence "zeta eta theta." Both alphabets get a little shaky toward the end. I always have to sing the whole alphabet song to remember the sequence of the letters between QRS and XYZ. The Greek alphabet opens up after Greek Y—upsilon—and tucks in those three consonants that the Phoenician aleph bet lacked and the Greeks could not do without—before crowning the alphabet with omega. Remember that the alphabet song, set to the same tune as "Twinkle, Twinkle, Little Star" and "Baa Baa Black Sheep," does not actually end at the letter Z, but goes on to fill out the cadence with the rather lame "Now I know my ABC's. Next time, won't you sing with me." If you were in my second-grade class, you went on to sing the alphabet backwards, proving total mastery, and maybe absorbing the fact that alphabetical order does not necessarily imply a hierarchy.

Z is still called zed in British English, probably a holdover from the Greek zeta. It is thanks to Noah Webster that Americans call it zee instead of zed. Webster knew a thing or two about alphabets—he studied dozens of languages before compiling the great American dictionary. He also knew about pedagogy—how to teach children—having started out as a schoolteacher; his first dictionary was conceived as a spelling aid for grammar schools. Webster would not have attempted to change the order of the alphabet—that would be madness—but he did suggest some improvements.

Rhyme makes things easier to memorize (zeta eta theta), and Webster thought it might better serve the cause of literacy to change the names of certain letters in the English alphabet. H (aitch) would more logically be called "he," following the pattern of B, C, D, E, and representing its consonant sound. H has a convoluted history as a consonant. In Greek it's a vowel, eta. The letter got broken down and its upper extremities were used to create breathing marks perched over initial vowels. And W (double U) is completely wrong: I remember looking at it in kindergarten and thinking, But that's a double V. Webster wanted to simplify W by calling it "we." (In ancient times, the Greek alphabet had the digamma for the sound of W, but it disappeared sometime after the fall of Troy and hasn't been heard from since, except in remote scholarly regions—and among the Etruscans.) For similar reasons, Webster thought that Y (why) might better be called "yi." What a nut. None of these innovations caught on, but by the time Webster got to the end of the alphabet he seems to have worn down the opposition. He succeeded in getting Americans to refer to the ultimate character as zee instead of zed.

Things that come first and last are in especially emphatic positions. In English, we use the expression A to Z to mean everything you need to know—about fashion, fundraising, sex—in a prescribed and predictable order. A theater critic might write that an actress "ran the gamut of emotions from A to Z," meaning that by the end she was all out, empty, exhausted. Our alphabet runs out of steam. But the Greek alphabet is different. It ends not with a seldom-used consonant but with a big fat vowel: omega, big O, Ω, ω. Oh! Omega has energy in it, it has breath and inspiration. Omega sends you back to the vowel at the beginning, to the alpha, in a way that Z just doesn't, and picks up overtones from the vowel in the middle, the omnicron, or small O. The very shape of the omega is open at the end. The Greek alphabet, like Greek syntax, does not seem linear: it feels round. Nobody seriously translates "I am the Alpha and the Omega," the words of the Almighty from the Book of Revelation, as "I am A through Z." The Greek alphabet is infinite.

*Reprinted from Greek to Me by Mary Norris. Copyright © 2019. Used with permission of the publisher, W. W. Norton & Company, Inc. All rights reserved.

MORE TO EXPLORE: 7 Words from the Greek Alphabet