'-Gate': Notes on a Scandal

A suffix that stinks of corruption.

The use of the suffix –gate following a relevant word to refer to scandals (such as Irangate, or more recently, Bridgegate) has long been a media trope. Most people are already aware of the origin: Watergate, the shorthand used for the scandal in which the offices of the Democratic National Committee were burglarized, with an investigation later revealing that the burglary was covered up by high-level officials in the administration of U.S. President Richard M. Nixon. The name Watergate refers to the name of the office complex, located in the Foggy Bottom district of Washington, D.C., consisting of office buildings, apartments, and the Watergate Hotel. 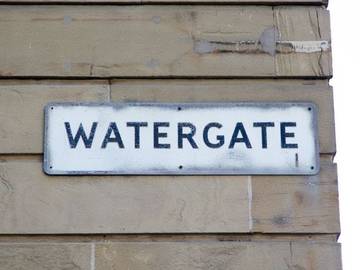 The -gate heard round the world.

That scandal ultimately led to Nixon resigning from the presidency in August 1974. But by then, Watergate was itself used for scandals likened to Watergate for their levels of concealment and corruption:

“Why obviously?” “Jesus, Doctor!” He was momentarily indignant. “What sort of a question is that? A Central American Watergate you want now?” “I only asked.”
— Eric Ambler, Doctor Frigo, 1974

By the time of Nixon’s resignation, the use of –gate as a somewhat mocking way to suffix the names of scandals (political or otherwise) had already taken hold in the American media and continued throughout the decade.

Last week the French wine industry was in ferment over the disclosure of a fraudulent scheme to peddle cheap wine as expensive Bordeaux … “You’ll think it’s exaggerating to say this, but the U.S. had Watergate and now we have our winegate,” a Bordeaux journalist told Newsweek’s Seth Goldschlager.
— Newsweek, 10 Sept. 1973

The suspects allegedly falsified records, fed incriminating evidence through a paper shredder and conducted a cover-up so pervasive that one investigator calls it "Ice Cream Gate."
— Time, 18 Aug. 1975

Since obscenity is known to be the most low-investment-high-return of all businesses, there should be an investigation to ascertain whether payoffs are blocking enforcement of the law. May we have a burlesk-gate on our hands.
— The Pueblo Star-Journal, 17 May 1979

Some instances of the –gate suffix led to serendipitously punny phrasings that were likely too juicy for a writer to pass up.

For example, appending –gate to the last name of Daniel J. Flood, a long-serving U.S. Representative from Pennsylvania, yielded Floodgate when accusations surfaced in 1978 that he used his office to direct money and contracts to favored people and corporations in exchange for kickbacks.

In the 1980s, a scandal involving sexual misconduct and misappropriation of funds by the televangelists Jim and Tammy Faye Bakker led to New York Times columnist Russell Baker to coin the name PearlyGate, cleverly echoing the phrase pearly gates, envisioned as the place where one earns entrance to Heaven as described in Revelation 21:21.

The –gate suffix has continued to be applied to more recent scandals, generations after its originator, seemingly with the paradoxical effect of simultaneously magnifying and diminishing the affair in question.

Bridgegate was the name for what was known more descriptively as the Fort Lee Lane Closure Scandal, in which lanes at the toll plaza on the upper level of the George Washington Bridge in Fort Lee, New Jersey were closed by members of the administration of New Jersey governor Chris Christie purportedly as an act of retribution against Fort Lee’s mayor, Mark Sokolich.

When New England Patriots quarterback Tom Brady was accused of using underinflated footballs during the AFC Championship Game against the Indianapolis Colts in January 2015—a violation that ultimately resulted in Brady receiving a four-game suspension the following season—the scandal became known in the media as Deflategate.

And there are dozens of others, before and after and in between: Nipplegate (in which Janet Jackson’s breast was exposed during the Super Bowl halftime show); Skategate (a judging scandal regarding the pairs’ figure skating event at the 2002 Winter Olympics); and Spygate (another scandal involving the New England Patriots, accused of using video equipment to record the signals used by their opponents).

For every scandal, it seems, there will always be a gate. Remember to close it on your way out.