Is 'fulsome praise' a good thing?

The word has both positive and negative meanings, so context is key

Fulsome is a troublesome word. And it's also a word that represents the rare case in which dictionaries have made the word’s meaning more confusing rather than more clear.

Fulsome seems like an emphatic way of saying “full” or “complete,” and indeed in its oldest use, which dates as far back as the 1300s, it meant "very full and abundant; copious.” It then came to be used to mean “plump, shapely,” and, more figuratively, “full and well developed in sound,” as in “the singer’s fulsome voice.” 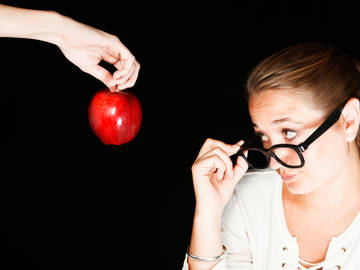 'Fulsome' can apply to excessive flattery, as in "a student attempting to win good grades by showering the teacher with fulsome praise," or it can simply indicate abundance, as in "a grateful alumnus fulsome in his praise of his former English teacher."

So far, so good: many words’ meanings move from concrete senses to more abstract ones over time.

The Oxford English Dictionary records a parallel trajectory of the meaning of fulsome, this time relating to food rather than size. It started out meaning “filling” or “heavy,” then “tending to cause nausea,” and then finally “cloying” or “wearisome from excess or repetition.” Another group of meanings, possibly derived from the “nauseous” usage, included “foul-smelling” and “repulsive.” These meanings are all obsolete in modern English, and are historically rare enough to be omitted from this dictionary (the latter group is, however, included in Merriam-Webster's Unabridged). A more abstract meaning of “aesthetically, morally, or generally offensive” remains in this dictionary, as does “exceeding the bounds of good taste” or “overdone.” These meanings are in fact still current, as are the "abundant," "shapely," and "well developed" meanings mentioned above.

When Samuel Johnson, working in England, made his entry for fulsome in his famous 1755 dictionary, he recorded only the meanings “nauseous; offensive” and “of a rank and odious smell.” Noah Webster’s entry in his 1828 American Dictionary is very similar, but he added a curious note:

These are the English definitions of fulsome, but I have never witnessed such applications of the word in the United States. It seems that full and foul are radically the same word, the primary sense of which is stuffed, crowded, from the sense of putting on or in. In the United States, the compound fullsome takes its signification from full, in the sense of cloying or satiating, and in England, fulsome takes its predominant sense from foulness.

Gross; disgusting by plainness, grossness or excess; as fullsome flattery or praise.

Webster of course should have simply added this definition to his entry for fulsome; it was not a distinct word, but an additional meaning. The fact that neither Johnson nor Webster included the oldest meaning of fulsome (“copious”) shows that it had fallen from use by the time of, or during, their lifetimes. And evidence shows that by the 19th century fulsome was established as a literary term chiefly expressing disapproval of excessive and obsequious praise and flattery—that is, exactly as Webster had defined it.

But in the early 20th century, just in time to confuse us all, the word’s “copious” meaning came bounding back into use, doubtless by association with its etymological relative full, an adjective that usually has positive connotations. Unfortunately, this revival was missed by lexicographers in the first decades of the century, so that the “copious” meaning continued to be labelled obsolete until 1961. The result is that fulsome is now used with positive or neutral connotations at least as often as with negative connotations, but many people consider the “copious” meaning to be an error, even though it is the etymologically purest use of the word.

The result of this muddy history is muddied meanings. Even though full is usually a positive word, fulsome can have pejorative connotations in phrases like "fulsome praise," where it is often taken to mean “effusive, excessive, or insincere praise.” A phrase like "a fulsome apology" is likely to be ambiguous: some may think it means "a complete apology," while others may think it means "an effusive, excessive, or insincere apology." Therefore, we suggest that you use caution when using fulsome: make sure your context is unambiguous, or you may have to issue a full apology.