The Surprising History of 'Freelance'

Freelancing has always been a battle. Literally.

Talk to anyone who's looking for work these days, and you'll hear one word repeated more and more: freelance. We're most familiar with the verb, which refers to pursuing a career without making a long-term commitment to one employer. Usually, people who freelance are self-employed; they decide who they'll work for and for how long. You could call them corporate mercenaries, working for the highest bidder—and if you did so, you wouldn't be too far from the word's original meaning. 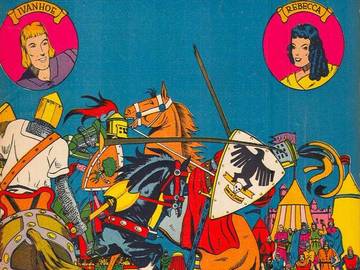 Our earliest written evidence for 'freelance' comes from Sir Walter Scott's Ivanhoe, in which a lord refers to his paid army of 'free lances'.

When freelance first came into English in the early 1800s, it was used to refer to a medieval mercenary who would fight for whichever nation or person paid them the most. Our earliest written evidence for this use (so far, that is) is in Sir Walter Scott's novel, Ivanhoe, where a feudal lord refers to the paid army he's assembled:

I offered Richard the service of my Free Lances, and he refused them—I will lead them to Hull, seize on shipping, and embark for Flanders; thanks to the bustling times, a man of action will always find employment.

The evocative word took root quickly, and also swiftly gained broader meanings: one referring to a politician without political affiliation (who we'd call an independent these days), and one referring to a person who does any type of work on one's own terms and without any permanent or long-term commitment to an employer. Though freelancer is the noun we now usually use to refer to this last set of people, it's a newer term than freelance. So while "He's a freelance" may sound like modern jargon, it is the original term.

Interestingly enough, the phenomenon of freelances was well-documented throughout medieval warfare (and earlier), even if the word freelance was a 19th-century creation. Hired soldiers were common after about 1000 A.D. and were important pieces of major military campaigns between the 12th and 14th centuries. But most of the fancy words English has for these hired soldiers in the Middle Ages came about well after the Middle Ages: condottiere, which refers to a leader of a band of mercenary soldiers, and lansquenet, which refers specifically to German hired soldier during the 15th through 17th centuries, showed up only a hundred or so years before freelance did. So what were freelances called before we had freelance? Latin records from the Middle Ages show that most often, hired soldiers were called stipendiarii (or stipendiaries, meaning they were given a stipend for fighting), soliderii ("soldiers"), or simply mercennarius ("mercenaries").