'Frankenstein' and 'Frankenfood': Creator or creation?

Giving life to a new prefix 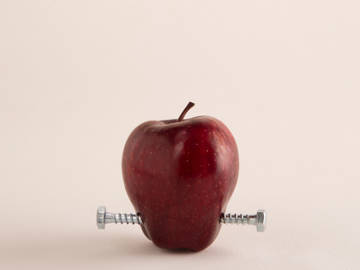 "The Apple" played by Core-is Karloff

One of the indicators of having achieved a certain level (or perhaps just a certain type) of education is the way in which one approaches the word Frankenstein. Some think use of this word should be restricted to describing someone who has created a monster, others think it’s just fine to describe a monster this way and feel quite passionate on the subject, and others still don’t really think about it one way or another. Here is what our Dictionary of English Usage has to say on the matter:

For sheer triviality, few subjects can top the question of whether it is all right to use Frankenstein to refer to the creation, the monster, and not just to its creator.

Figurative Use of 'Frankenstein'

‘Sheer triviality’ is one of our middle names (along with ‘not invited back,’ ‘I didn’t ask,’ and ‘unwelcome dinner companion’), so we are prepared to examine this question. Frankenstein is, of course, the name of a novel by Mary Wollstonecraft Shelley, published in 1818, in which is told the story of Victor Frankenstein, who artificially creates a human being (with decidedly unwelcome results). As Frankenstein is the name of the scientist who brought the monster to life, some people hold that this should be reflected in the use of the name. In the earliest cases of Frankenstein being employed figuratively (referring to an entity who is not the titular figure of the original book) it is for a creator of life, rather than the creation.

The one might enable a Frankenstein to form his image of clay, and, it may be, to endow it with vitality and powers of motion; but it is only the other that could furnish the Promethean fire from heaven, to inspire it with the affections of humanity.
— The Athenian, (Boston, MA), 15 Feb. 1830

They told me that I should set in motion a tremendous principle, which no human power could control; that I should, like a Frankenstein, create a monster of gigantic strength….
— Sheffield Independent (Sheffield, Eng.), 16 Oct. 1830

It did not take long, however, for people to extend use of this name still further, and to apply it to things that have been created. A mere 16 years after the publication of the book saw writers beginning to use Frankenstein in this manner.

Appeals to the public are ticklish things. The public has a large body and a small soul; it is little better than a Frankenstein.
— The New England Magazine (Boston, MA), Jan.-Jun. 1834

We provide three definitions for Frankenstein: “the title character in Mary W. Shelley's novel Frankenstein who creates a monster that ruins his life,” “a monster in the shape of a man especially in popularized versions of the Frankenstein story,” and “a monstrous creation (especially a work or agency that ruins its originator).” We added the sense of ‘monster’ to the one meaning ‘creator of monster’ in 1934; this use is hardly new and now is certainly the most common one. Yet it is not unusual to encounter those who insist that a distinction should be drawn between Frankenstein (the scientist) and Frankenstein’s monster(the scientist’s creation).

In recent years the beginning of Frankenstein has split off, and can be found functioning as a prefix, with the loose meaning of ‘modified (especially in genetics).’ The most common such word is Frankenfood, but Franken- may be found added to such things as meat, dogs, and words.

In the United States pressure groups have named them “Frankenfoods,” conjuring up the image of a mad scientist stirring a pot full of poisons.
— Nigel Hawker, The Times (London, Eng.), 26 Sept. 1992

Our affection for these Frankenwords would have horrified the classically educated language police of the 19th century, both English and American.
— Jan Freeman, The Boston Globe, 27 Feb. 2005

Like “wholphins” or “ligers,” these portmanteau hybrid names were both uncanny—a little bit Franken-dog—and predictability, and branding, and therefore a justification for charging in the four figures for what would otherwise be, or course, a mutt.
— Britt Peterson, The Boston Globe, 13 Jul. 2014

None of the senses of Frankenstein that we define are stigmatized; you may safely describe a monster, or a monstrous creation, as a Frankenstein. Unless you want to be that particular sort of stickler that insists on Frankenstein’s monster (everyone loves that person), in which case we have to inform you that you are now required to only use Frankenfood to refer to the person who grew the genetically modified crops, and not to the food itself.