All About Latin Plurals

Latin has a few plural forms, so check our dictionary.

There are a few ways to pluralize words from Latin. Some words that end in -us are pluralized with an -i (like alumnus to alumni). Some words don't change form in Latin, so their plurals have been Anglicized with an additional -es (status to statuses). Finally, many scientific words come from New Latin, which has numerous possible endings, such as -ae (antennae), -a (data), -es (crises), and more. 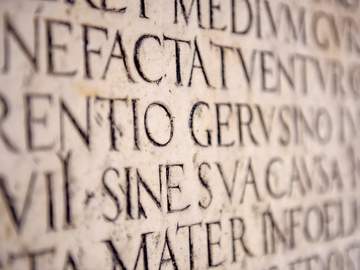 The biggest rule is: there isn't one big rule.

One common misconception floating around the English language is the notion that all Latin-derived nouns that end in the suffix -us in the singular should end in -i when they are plural. And there is, in fact, a plethora of such -i Latin plurals in English: witness oculus (a word for an oval window or for a circular opening at the top of a dome) and its plural oculi, or the more common alumnus/alumni and stimulus/stimuli.

Words from Latin Without '-i' Plurals

However, there are quite a few Latin nouns that do not have an -i plural even in their original language that have become naturalized in the English language. In Latin, these nouns belong to a group in which the singular and plural were spelled alike. A sampling of such words is prospectus, status, and apparatus. None of those words have an -i plural. In English, the plural of prospectus is Anglicized to prospectuses and that of status to statuses. Apparatus, though, has the regular English plural apparatuses but also retains in some use the Latin plural apparatus.

In addition (and to make things even more complicated), many words originating in science are derived from something called New Latin (e.g., octopus and phobia), a type of Latin that has been used since the end of the Middle Ages specifically for scientific classification and descriptions. Some of these New Latin words are inflected like Medieval Latin words were; however, a good number acquired fully English inflected forms as well.

Abscissa, which refers to the horizontal coordinate of a point in a plane Cartesian coordinate system that is obtained by measuring parallel to the x-axis (see illustration at definition link), is a good example. The New Latin word has both the Latinate plural abscissae and the Anglicized plural abscissas, which brings up other plural forms that include the suffix -ae and -a, along with inflections ending in -s and -es, which can orthographically transform a word. For example, we have addendum/addenda, antenna/antennae, medium/media, crisis/crises, crux/cruces, and index/indices.

In sum: some Latin-derived words have both a native plural and an English form. There is also the acceptable, grammatically challenging use of the Latin plural as a singular form in English, as in agenda, data, and trivia. When considering a Latin plural or singular form, consult our dictionary—that is our recommendation.