What's the difference between an antiaircraft gun and a PR pro?

The author caught flack for flacking his memoir where he wasn't welcome, so his flack issued an apology in a press release. 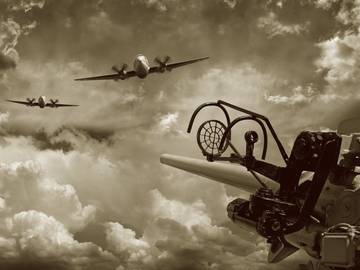 'Flack' comes from the German word 'Fliegerabwehrkanonen.' Pilots under fire must have needed a shorter word.

When you hear of someone "catching flack," you're hearing a figurative extension of a term used for antiaircraft guns, or for the shells fired from them. That term, more commonly spelled flak, is short for Fliegerabwehrkanonen, from the German words for "flyer," "defense," and "cannons." In World War II, to "catch flak" literally meant to be damaged by gunshots:

As soon as Guttenberger pulled up from launching his torpedo at Yamato's port beam, Duffy unhooked his harness and raised himself up to have a look. In that instant, the plane caught flak and the jolt pounded Duffy's head into the canopy.
— David Sears, At War With the Wind, 2008

The figurative use of flak to mean criticism came about in the 1960s. For many years it kept the same spelling as the weaponry, with flack emerging as a common variant in the later decades of the twentieth century.

The use of flack to refer to a publicity agent dates from the 1930s, and there are many apocryphal stories surrounding its origin, including one ascribing the word to a Hollywood publicist named Gene Flack. The dictionary lists the word's origin as unknown.

In 1970, the writer Tom Wolfe (The Bonfire of the Vanities) published "Mau-mauing the Flak Catchers," an essay portraying the intimidation tactics leveled against government workers running San Francisco's Office of Economic Opportunity. Wolfe used the term flak catcher to refer to the low-level workers caught in the middle of corrupt actions leveled against the city's anti-poverty programs:

And then it dawns on you, and you wonder why it took so long for you to realize it. This man is the flak catcher. His job is to catch the flak for the No. 1 man.
— Tom Wolfe, "Mau-mauing the Flak Catchers," 1970

Wolfe's use of the term was more or less consistent with the established use of figurative flak. But flak catcher would eventually take on a life of its own, bleeding into the publicity sense of flack.

Wolfe's use likely gave credence to the belief of a relationship between the "criticism" sense of flak and the "publicity" sense of flack, seeing as "to catch flak" for another is to absorb the criticism directed at another so that person doesn't look bad in the public eye. The OED now defines flak-catcher as "one who deals with and deflects adverse or hostile comment, questions, etc., in order to protect a person or institution from unfavorable publicity."

This might partly explain why we now see overlap between flak and flack. For the most part, flak remains the spelling used for the gunfire, with flack as an occasional variant that turns up slightly more frequently when referring to criticism. For the publicist/publicity senses, while flack was for a long time the preferred spelling, flak has turned up increasingly over the past decade. So, while you should err on the side of flack unless you're writing a report on military action, flak isn't technically a typo. Certainly not one you should catch flack for.