‘Faculty’ and ‘Facility’: A School of Thought

Learn these, and you can do anything.

The nouns faculty and facility differ by only a couple of letters, and are similar in other respects as well. Each has a number of senses, and each ultimately derives from the same word, the Latin facilis (“easy”). 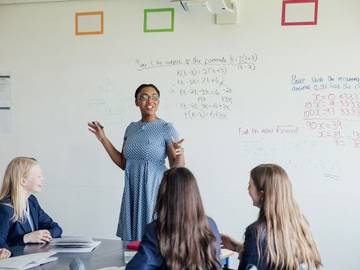 But both words also have senses pertaining to the ability to do something. Faculty is defined as “ability or power” with specific senses denoting innate or acquired ability, an inherent capability or function, or a natural aptitude. You can speak of one’s faculty of sight or hearing, for example. When speaking of an ability or aptitude, faculty suggests a basic competence:

In it, he argued that the human mind, rather than being a unitary system as was often supposed, comprises a set of inborn, compartmentalized, purpose-built subsystems: a faculty for language, another for musical ability, still another for mathematics, and so on. These faculties, Dr. Fodor explained, operate by means of abstract algorithms, much as computers do.
— Margalit, Fox, The New York Times, 30 Nov. 2017

Facility stresses the ability to do something with an ease or comfort that others might not possess. You may have a facility for adding numbers quickly, for example. Here are some other examples:

Just weeks into her term, [Rep. Alexandria Ocasio-Cortez] has gained 2.4 million followers, eclipsing Speaker Nancy Pelosi at 2 million followers. But the party will have to grapple with whether the New York Democrat’s surge in Twitter followers grew out of her facility with the platform or the force of her ideas.
— Emily Kopp, Roll Call, 17 Jan. 2019

Burke, an emergent director in Chicago, does not yet have a deep bench of work. But if you go and see “Bitter Earth,” you’ll intuit his visual sophistication and his facility for sculpting his actors; there is more interesting direction going on here that you see in the work of other, far louder, directors.
— Chris Jones, The Chicago Tribune, 9 Nov. 2018

But there are times when faculty is used for such an instance, particularly when the ability seems natural:

When he tells his story, Gautam is sure to emphasize his good luck along with his hard work and determination. But he also clearly has a faculty for winning people over.
— Melody Schreiber, NPR.org, 21 Sept. 2018

It is worth noting that one can have a faculty and a facility for doing the same thing. Having a faculty for speech means you can communicate by enunciating words and stringing them together. But having a facility for speech suggests that you can speak with a particular eloquence, the kind that might hold an audience’s attention.

Because facility and faculty are similar in appearance and comparable in meaning, writers have occasionally played the two off each other:

"In your own case," said I, "from all that you have told me, it seems obvious that your faculty of observation and your peculiar facility for deduction are due to your own systematic training."
— Arthur Conan Doyle, "The Adventure of the Greek Interpreter,” 1893

Dr. Watson’s line demonstrates the distinction between facility and faculty with near perfection. The ability to observe is one that most people naturally possess, but Sherlock Holmes’ powers of deduction are not shared by most people—evidenced by Watson describing them as “peculiar.”