Sometimes you need a little extra. You order extra cheese on your pizza; you might spend extra to get an upgrade to a better hotel room or a first-class airline seat; or you work extra hours to meet a deadline for a job. Extra is a versatile word: it can be a noun (“a computer loaded with extras”) or an adverb (“extra special”), but it is predominantly used as an adjective (“made extra party favors in case more guests arrived”). 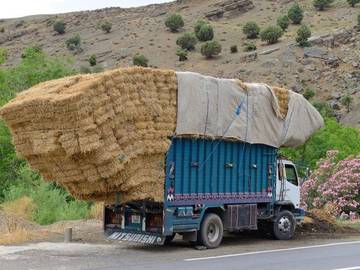 This truck is being pretty extra, tbh.

Extra implies excess, surplus, something additional beyond what is expected or necessary. In Latin, extra means “outside” or “beyond” and it’s that meaning we find when it prefixes words like extraterrestrial (a creature originating from “outside” planet Earth) or extrajudicial (describing something “beyond” what is allowed by a court).

For a word with a classical pedigree that has long been a part of English, it might be surprising that we are seeing extra used in recent years with a slightly different twist.

While the royal family never ceases to fascinate, it’s sometimes the smallest details of royal life that seem to garner the most attention. For instance, Queen Elizabeth reportedly eats her bananas with a knife and fork, because of course she does. It may seem like involving actual cutlery is just a tiny bit extra, especially when you could just peel your banana by hand, but then again this is the Queen we are talking about.
— Carolyn de Lorenzo, Bustle, 20 Nov. 2018

“I think it’s just really fun getting into the character and being really extra,” [Matt] Peters said. “Before the show, I start walking around as my character and everybody gets really annoyed, but I think just the most fun thing about it for me in this show is really … getting into that character and just being this very outgoing, flamboyant type of person.”
— Lauren Schuster, The Quadrangle (Manhattan College), 13 Nov. 2018

Actually, scratch that: It's wedding looks, plural. "All I know is I wanna change at least three times," she [Lala Kent] told us. "So I've clicked the save button on Instagram for looks that I like, but I just wanna be so extra on my wedding day because I’m not giving them Lala unless I’m extra, you know?"
— Jenny Berg, BravoTV.com, 19 Dec. 2018

Smesko enters the new season coming up on a coaching milestone. Entering the year he has 496 career wins at FGCU. His players are very excited about his upcoming milestone. "It’s going to be really exciting, I can’t wait I’m going to be really extra about it. I know I am going to embarrass him, hopefully it’s on TV because you know I will embarrass him," junior guard Nasrin Ulel said.
— Andrew McDevitt, ABC-7.com (Fort Myers, Fla.), 5 Nov. 2018

The common thread linking these uses of extra go beyond mere extension past an accepted quantity or limit as connoted by “extra cheese” or “extra party favors.” One could say it is closer to the idea of extremeness or outlandishness suggested by the adverbial use of extra as found in “extra spicy chicken wings.” It’s about going over the top for the sake of going over the top.

The more noticeable difference—noticeable, at least, to lexicographers—is one of function. Up until now, traditional use of extra has been almost exclusively prepositive—that is, one that is positioned before the noun or adjective it modifies (“extra paper clips,” “tried extra hard,” etc.)

This new use of extra often features the word as a predicate adjective—that is, separated from the noun that it modifies by a verb (often a linking verb such as is). Note that it can also be used with adverbs of degree ("a tiny bit"; "really"), which is different from how extra has been used traditionally (that is, as an absolute modifier). We don’t normally say we “ordered cheese that was extra” for the pizza, and we don’t make “really extra” or even “a tiny bit extra” party favors. In this kind of use, extra takes on a more flexible role than it had previously, one that we usually attribute to more “typical” adjectives such as hot (“the attic was swelteringly hot”) or heavy (“the box was too heavy to lift”).

But what else would you expect of extra? It goes the extra mile, and then some.