Contrast is responsible for at least part of Ella Fitzgerald’s greatness: she was both a peerless interpreter of the American popular song and perhaps the greatest vocal improviser in jazz. 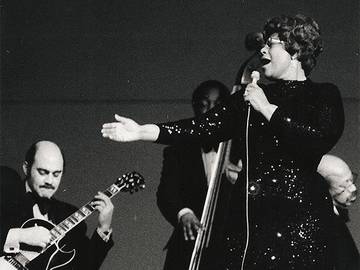 Ella Fitzgerald brought life to the words of great composers and went beyond words through her masterful scat performances.

Her clear voice, exemplary diction, and perfect pitch made her the ideal artist to give life to the songs by composers such as Cole Porter, Irving Berlin, and George and Ira Gershwin. Her sequence of “songbook” recordings stands as the definitive record of this repertoire.

As an improviser, her virtuosic agility and harmonic imagination gave her the freedom to create variations on the melodies of songs. She also produced entirely original and thrilling performances as a scat singer, using nonsense syllables to imitate the way that horn players phrase and articulate. Scat was pioneered by Louis Armstrong in the 1920s. In the 1950s, a series of records that Ella and Louis made together were masterly studies in contrast—her bell-like clarity and his famously gritty growl seemed made for each other. Like the word bop, short for bebop, scat is almost certainly imitative in origin, using the voice to sound like a trumpet or a saxophone. Even the titles of songs reveal a playful approach to language: the first recorded scat by Armstrong was Heebie Jeebies from 1926, and one of Ella’s earliest hits was A Tisket, A Tasket, recorded in 1938 with Chick Webb’s big band. Both titles, like the word bebop itself, could be said to exhibit what linguists call reduplication, which can be rhyming (like helter-skelter or boogie-woogie) or involve vowel substitution (like zig-zag or chit-chat).

For her collection of songs by Johnny Mercer, Ella recorded Too Marvelous for Words, which includes a reference to “Webster’s Dictionary.” It’s a song that Frank Sinatra performed often; they also performed duets that reveal the differences and similarities of their distinct approaches to phrasing.

Ella’s twin legacy as popular singer and jazz artist will always be at the intersection of words and music. Her respect and care with the lyrics of songs were matched by the spark and intensity of her scat singing, and her scatting became a way to go beyond language, beyond words.