An elegy is a poem that expresses sorrow or melancholy, often about someone who has died. A eulogy is usually a speech that praises the achievements and character of a person who has died, often as part of a funeral service.

Most of the time, elegy and eulogy aren't confused. But a person asked to explain the difference between the two might encounter some difficulty as both words conjure sadness and reflection, and are generally tied to loss. We think of a eulogy as the kind of thing you hear at a funeral, and elegy as referring to something that expresses sorrow in a reflective way. 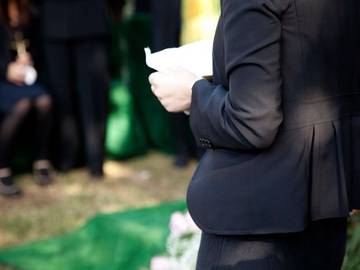 A 'eulogy,' despite its association with melancholy settings, is meant to offer praise.

Occasionally they are presented in contrast:

Jennifer Homans has put her mourning into action and has written its history, an eloquent and lasting elegy to an unlasting art. It is, alas, a eulogy.
— Toni Bentley, The New York Times Book Review, 28 Nov. 2010

Meaning and Examples of an Elegy

Historically speaking, an elegy is a poem, one expressing sorrow or melancholy. Quite often, the subject is someone who has died. In Latin, elegia means "a poem in elegiac couplets"; elegy ultimately derives from the Greek elegos, meaning "song of mourning."

An example would be "Elegy for Jane", by the American poet Theodore Roethke (1908-1963), written to honor one of the poet's students, who died in a horse-riding accident. Roethke remembers the girl's "neckcurls, limp and damp as tendrils" and "her quick look, a sidelong pickerel smile." Then he writes:

My sparrow, you are not here,

The sides of wet stones cannot console me,

Nor the moss, wound with the last light.

Generally speaking, an elegy can be any work that considers a subject with a sense or reflection or melancholy, such as the title of J. D. Vance's Hillbilly Elegy, a memoir about growing up amid poverty in Appalachia.

In contextual use, the noun will often will be followed the preposition to or for:

Bill McKibben's The End of Nature was a mournful book, an elegy for a wild nature irretrievably contaminated by civilization, and a prophecy about what would happen if we didn't get ourselves in hand.
— Gary Greenberg, Harper's, September 2011

Before the main bout, the klaxon-voiced announcer, Joe Humphreys, got up in the ring to deliver an elegy to the Garden. "We mourn our loss," he shouted, "but take with us fragrant memories!"
— Andy Logan, The New Yorker, 11 May 1992

Meaning and Examples of A Eulogy

A eulogy, despite its association with melancholy settings (such as funerals), is meant to offer praise. When it is part of a funeral oration, the eulogy celebrates the achievements and character of the person who has died.

A gifted architectural designer and welcoming hostess, Mary, 52, was universally seen as a giving woman devoted to her children, her friends, her husband, her charities and the Catholic Church. Her husband, 58, estranged since 2010, had only achingly kind words in his eulogy. "She was a genius at friendship," he said from the pulpit. But, he added, "she had this sadness that kicked her and chased her."
— Jill Smolowe et al., People, 4 June 2012

The element of praise is hinted at in the Greek prefix eu-, which means "good" or "true" and is found in such words as euphony and euonym (a name that is particularly appropriate for something).

Are elegy and eulogy that hard to distinguish? It's hard to say. Certainly, there are times when eulogy is encountered in contexts that suggest that it is lamentation, rather than praise, that is being expressed:

With their auras of longing and loss, "Let It Die" and "Long Road to Ruin" could be heard as eulogies for his late pal Kurt Cobain-or simply the reflections of someone who's grown up gracefully without dousing rock and roll's adolescent fire.
— Jon Young, Mother Jones, November & December 2007

When the words are blurred together, the general meaning is an expression of sadness for someone lost.

This was kind of a heavy article, so here are some kittens to cheer you up.