From Remarkably Good to Shockingly Bad

Some words originally used for animals that gather in flocks have been herded into use for people, too. The Latin word grex means "flock," "herd," or "group," and is the root of several English words. Gregarious originally meant "tending to live in a flock, herd, or community rather than alone" but has become a synonym for "sociable." Egregious literally meant "out of the herd" in Latin — something that stands apart. Its first meaning in English was consequently "outstanding" or "remarkable for good quality," but over time that changed to become "very bad and easily noticed" or "flagrant." 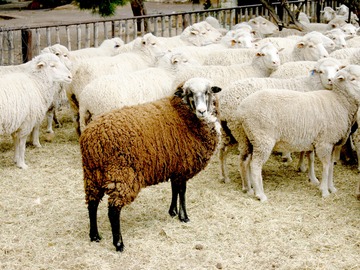 The verbs aggregate, congregate, and segregate are also relatives of grex, with meanings that relate to joining or separating from a herd or group: "to join or combine into a single group" (aggregate); "to come together in a group or crowd" (congregate); and "to separate groups of people because of their particular race, religion, etc." (segregate). Another verb, disgregate, meaning "to separate" or "to scatter," is now obsolete in English.

... the public perception is that too many corporate executives have
committed egregious breaches of trust by cooking the books, shading the truth, and enriching
themselves with huge stock-option profits while shareholders suffered breathtaking losses.
— John A. Byrne et al., Business Week, 6 May 2002