Putting 'Edible' and 'Eatable' on the Table

Giving you something to chew on.

Edible and eatable can be, and have been for centuries, used interchangeably to describe things that are fit or able to be eaten. Usage, over many years, however, has inevitably slightly changed how the words are used, resulting in nuances of meaning. In particular, edible has come to indicate that something is safe to ingest but with no indication of how it tastes, whereas eatable is most often used to indicate whether something that can be eaten is at least palatable or tolerable to the taste. To accurately convey to a finicky eater the quality of food being considered for consumption, we must be discerning in our word choice. But considering actual usage of edible and eatable, not everyone seems to be aware of the subtle semantic distinction between the two. So, please partake in our course on the words. 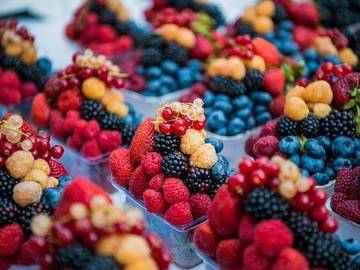 Our usage advice is safe to consume.

Edible is a late 16th-century borrowing from Late Latin ediblis, which is a derivative of the Latin verb edere, meaning "to eat." As mentioned, edible (which is the commoner of the two words) is most often used to indicate that something is suitable and safe to eat. Nontoxic and nonpoisonous items found in nature that can be used for food, such as edible flower petals, insects, and berries—or the edible bird's nest used in soups—are correctly labeled "edible." Edible is also used frequently as an adjective confirming that a processed item, which seems like it shouldn't be ingested, can be without detriment to the body—for example, those "edible" fancy cake decorations made of gum paste, "photo paper," or wax, along with those metallic decorative balls.

The English verb eat (from Old English etan) and the suffix -able coalesced to form eatable sometime during the 14th century. The adjective is generally defined as "fit or able to be eaten," but over time, it developed a specific meaning suggesting so-so palatability ("It's not great, but it's eatable").

There are but three houses round London at which an eatable dinner may be obtained.
— Anthony Trollope, Orley Farm, 1861-1862

"It's red meat without guilt," Padron said. … "The liver makes a great pate," Helmling added. … This is a revolution, of a sort. For more than two centuries since the discovery of Australia, emus were considered useless as food. "The emu is altogether uneatable," wrote the usually careful Australian historian Alan Moorehead in his 1963 chronicle, Cooper's Creek…. "Have some," offered Helmling, spreading some emu pate on a slice of brie. The taste is rich, a little smoky: altogether eatable.
—Michael Browning, The Miami Herald, 10 Mar. 1996

And almost everything you'll see is eatable, edible. I mean, you can eat almost anything.
— Gene Wilder (as Willy Wonka), Willy Wonka & the Chocolate Factory (film), 1971

Everything in this room is eatable, even I'm eatable. But that is called cannibalism, my dear children, and is, in fact, frowned upon in most societies.

'Edible' and 'Eatable' as Nouns

Related noun forms of edible and eatable were cooked up in the 17th century and reflect the meanings of their derivatives: edible often serves as the word for something suitable or safe to eat but has general use as well that is equal to eatable; eatable mostly serves as the word for anything that can be eaten. Both nouns are usually used in their plural forms.

The Huckinses lived above the saloon in Commercial and Mrs. Huckins was always boiling ham and tongue and cooking pigs' feet and shredding cabbage for slaw, all these edibles being destined for the free-lunch counter downstairs.
—Edna Ferber, "Farmer in the Dell," 1919

He had 40 packs of Flower, some Chocolate, a great many small Cheeses, and abundance of Earthen Ware. The eatables we brought away, but the Earthen Vessels we had no occasion for, and therefore left them.
—William Dampier, A New Voyage Round the World, 1697

In the late 20th century, use of the noun edible was stoked when it started being applied to any of various food items containing THC, which is the chief intoxicant in marijuana. Here's an early example of edible referring to marijuana-packed eatables.

At another counter, a burly man named Gypsy sells marijuana chocolate brownies, oatmeal raisin cookies, vegetarian truffles and "merry pies." "I grind it up like flour," said Elena Marie Bridges, one of the cannabis chefs, who is writing a cookbook for pot recipes. A nursing assistant, Bridges learned to cook with marijuana from an AIDS patient she cared for. She also makes the edibles for her father, who has bone cancer.
— William Booth, The Washington Post, 21 Jan. 1997

Eatable is also used in this sense. It is currently not very common, but its usage is growing and we are chewing on entering it.

Edwards said the marijuana would be sold in pre-packed, child-proof containers and would be dispensed in four forms—dried flower, concentrates, topical and eatables.
— Jeff Pope, The Patriot Ledger, 24 Mar. 2016

Although the adjectives edible and eatable have distinct connotations, edible is frequently—and acceptably—used in contexts in which eatable would be the more appropriate word because taste is being described without mention of safety of consumption (although potential gagging might be hinted at). The substitution is likely from the general familiarity with edible in comparison to the infrequently encountered eatable.

Every day, Peel residents dump tons of edible food into the garbage, a recent curbside audit reveals. According to the region's audit, Peel households daily throw out all kinds of food—bread, meat, fruit, vegetables, eggs and dairy products—that could have been eaten.
— Nouman Khalil, The Mississauga News, 18 Sept. 2016

The acorn was a staple of their diet. [Richard] Carrico explains how they prepared it: "To make an acorn edible, you have to leach all the tannic acids out of it. If you just crack an acorn open and grind it, it's terribly bitter. You have to leach the bitterness out with water."
— The San Diego Union Tribune, 24 Oct. 2016

With humans now hoping to establish colonies on the moon, on Mars and in the stars beyond, researchers are focusing on ways to produce fresh food in space that will look, smell and taste like the edibles we have on the home planet.
— Benny Evangelista, The San Francisco Chronicle, 15 Aug. 2017

A penultimate note: both adjectives, edible and eatable, have negative forms that warn that something is not to be consumed in order to prevent vomiting, illness, or death, or general revulsion or repugnance. They are inedible, nonedible, and uneatable. Like their base words, they are interchangeable but have subtle differences in meaning. Something described as inedible or nonedible implies it should be avoided because it is toxic or poisonous. On the other hand, something uneatable implies it is unappetizing—perhaps from being overly seasoned or spiced (especially with one of the common culprits: salt, garlic, or onion), overly fatty or greasy, or undercooked or very overcooked—and should be avoided; however, if you're willing, try it without cringing (it's not inedible).

Ideally, we would like to see a clear differentiation in the uses of edible and eatable, but considering actual usage evidence, this doesn't seem possible—so eaters be leery of what adjective you hear before partaking. And if you're not sure, take a small bite, or better yet, ask a friend to or watch someone else try it—and wait for their reaction.