A Guide to Double Possessives 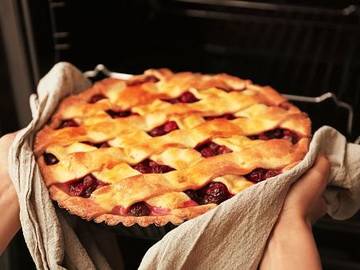 Grammatically, English sometimes gets doubly possessive—think "that mustache of Harry's," which could be revised to be singly possessive as "Harry's mustache." It's a curious thing, when you think about it. Curiosities of the language being our specialty, we're taking a closer look at the matter here.

First, a quick review of the grammatical possessive itself.

The possessive, or genitive, form in English is typically shown with an 's or ' tacked onto the end of a name or noun. A singular noun normally gets the 's, while a plural noun that ends in a /s/ or /z/ sound takes simply ':

Mabel's entry in the baking contest was a lemon meringue pie.

Each entry's tag listed only the ingredients used.

Contestants' identities were to be entirely unknown to the judges.

Possessive adjectives and pronouns can often be used instead of a name or noun:

Mabel had made her pie by candlelight.

No one knew that the pie was hers.

A less common and more formal way to show possession is with of, which is normally used when it is a thing, rather than a person or animal, that has possession. Typically, that thing is not one that can be touched or held.

The winner of the contest [=the contest's winner] would be given the keys to the city.

It had long been a dream of Mabel's to win the baking contest.

This kind of construction, known as the double possessive, or double genitive, dates back to Chaucer's time, and mostly gets used without being remarked upon by native speakers.

There are, however, people who will tell you to avoid it, which you can easily do by rewriting:

It had long been Mabel's dream to win the baking contest.

But what if we want to keep that of construction, which is, after all, allowed? Let's see if we can keep it in a single possessive construction:

It had long been a dream of Mabel to win the baking contest.

The result is problematic in two ways. It's unidiomatic—no native speaker would say it. And it's muddy semantically: the phrase "a dream of Mabel" carries the potential meaning of "a dream about Mabel," which distracts the reader from the meaning intended.

This becomes even clearer with the classic "picture" example, first used by Joseph Priestly in the late 18th century. There is no denying the difference in meaning conveyed in "this picture of my friend" and "this picture of my friend's": the first is a picture in which the friend appears—an example of the genitive of association, and the second is a picture that belongs to the friend—an example of the genitive of possession. The double possessive, aka double genitive, proves useful, and can indeed be used without one having to worry about grammatical transgression.

Before we leave this curiosity entirely, there is an oddity to address. We said above that showing possession with of is normally used when it is a thing that has possession, rather than a person or animal having possession. The double possessive/double genitive, however, throws that out the window. We can say "a dream of Mabel's," but we cannot say "the winner of the contest's." It turns out that English only lets people and animals be doubly possessive, and insists that they use of to do so. Don't blame us. We're only the messenger.