'Dogfishing': A Word in the Chase

Beware of the person with the dog in the photo.

Dogfishing is a newer dating-app phrase related to the practice of using a dog in profile pictures to lure more matches and conversations with potential dates. Often, the dog does not even belong to the person pictured and is merely being used as bait. The term is related to catfishing, or the practice of creating a fake online persona with the intent to deceive other people. 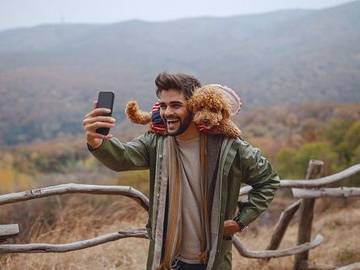 Dogfish is certainly less commonly known than catfish. Catfish is the name for a fish with a large head and whiskery feelers about its mouth or for a person who sets up a false online personal profile for fraudulent or deceptive purposes. A dogfish, on the other hand, is a small shark, and recently its name, like catfish, has been swimming in the sea of online dating terminology. Although there is an anecdotal marine catfish behind the virtual catfish, there is no actual fish hooked to the online term dogfish—in its place, there is a photogenic canine.

It is a truth of the internet that sometimes a person will post profile photos with themselves and a cute dog. This could be because they have a true bond with their dog, and they simply don’t have many good photos of themselves without their best friend. Perhaps the photos were cherry-picked to show their love for animals, and they hope to get the attention of a fellow dog owner. Or maybe they acknowledge that their good boy or girl is the real star of the show and that the cuteness of their pet might at least encourage people to read the profile and swipe/message.

Aside from the first case (which really is a bit far-fetched), it can be argued that the profilers are using their dogs as "bait" to get people to learn more about who they are as a person and to initiate a potential meetup. Figuratively, they are "fishing" with their dogs—hence, the term dogfishing.

But they are dog owners. Although it can be said that artifice was carried out, the truth of the matter is they weren't lying about who they are. You might think that sums up the story of the online dating phenomenon dogfishing; however, there is a twist. Profilers have been known to bait date app users with dogs that are not their own to catch their eye. That eye-grabber with which they are posing could be a friend's, acquaintance's, neighbor's, or even a stranger's. In any case, the doggos are being used to start convos.

Dogs, notably adorable photos of dogs, are a ubiquitous aspect of dating. They're convenient icebreakers on apps and on first dates. They add a nugget of personality to a profile. … This cultural obsession with dogs on the apps has spiraled into another problem: Daters are posting photos of pups they don't own, to attract matches. "Dogfishing" is not exactly a lie—the person did take a photo with that dog—but to some daters, it feels like a veiled form of deception. And things can get awkward fast when a date realizes that the pet in the profile solely exists as bait.
— Terry Nguyen, The Washington Post, 12 Aug. 2019

Dogfishing Before the Age of Dating Apps

Intentionally using a dog solely as a lure is obviously deceptive, and more than a little nonsensical: how does a person who is pictured with a dog that is not their own field questions about the dog when they begin chatting with a person? The inevitable confession most likely will bring their character into question. So why do it?

Maybe because the technique behind "dogfishing" has worked for centuries. IRL, the angling is as simple as walking a dog. Invariably someone will approach and, after petting the dog and a few nibbling exchanges with the owner, the "fish" either bites or doesn't. Online "dogfishing" originated from this type of land "fishing." Being in the company of a happy-go-lucky dog apparently gives the impression that you (owner or not) are a good person and probably a loyal partner. The truth of such matters, however, is beyond the purview of a dictionary.

To sum up: dogfishing refers to the posting of online date app photos featuring yourself and a dog, either your own or someone else's, with the intent to attract people to your profile. Dog owners might be fishing, but they are not deceiving, per se. If you're simply a dog or animal lover (or are maybe just hoping to meet Diane Lane), be sure to note that in your profile.