In these trying times, humanity collectively turns to one source of solace amidst the upheaval and grief:

No, not Pink Floyd.

And not dogs, either, but doggos. 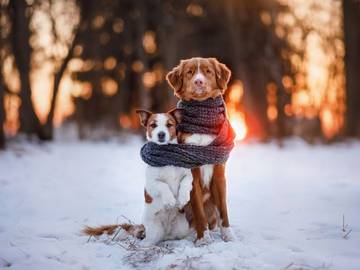 Doggo has its origins not with good puppers, but with late 19th-century slang:

Good question. To lie doggo was to stay hidden or to keep secret: to fly under the radar. The phrase was popularized by Rudyard Kipling, who used it in several of his stories, leading people to believe that it was actually Anglo-Indian in origin.

Why doggo? We can only speculate. Perhaps the phrase was meant to evoke the light sleep of dogs. What we do know is that the word itself does go back to dog, and is probably the word dog with the noun suffix -o, meaning "one that is, has the qualities of, or is associated with."

Lie doggo has a long life, gaining popularity in serial fiction of the 20th century (particularly in stories of war, espionage, or detective work). But doggo by itself was evocative enough that it began appearing in print occasionally as the name of a dog (or a dog-like object, in this case):

"It's a beastly shame, Doggo," confided Capps to the china pup that he had found his best and most discreet confidant.
— Reading Times, 28 Feb. 1907

...when the old oil flickered forth the dollars frolicked into the family coffers like fleas to a well-fed doggo.
— Boston Post 25 Dec. 1920

Doggo as a word is clearly catchy. It also shows up in the 1930s as the name of a dog repellant for gardens—the advertisements assure dog owners that the spray is not harmful to dogs—and in 1977, Mary Tyler Moore's new sitcom "We've Got Each Other" was deemed El Doggo, or "pretty bad." But for most of doggo's life, it appeared primarily in the phrase lie doggo to refer to secrecy or dormancy.

By the turn of this millennium, the phrase lie doggo had lost much of its ground in the US, though it still shows up in print in other English-speaking countries. It did pop up occasionally, but was primarily relegated to crossword puzzles. Which meant that the other doggo, the pupper-related one, suddenly seemed to be more common in print:

Despite your billing yourself (in whole bound volumes of e-mail) as a candidate for canine-care sainthood, your ex has as much right to doggo as you do.
— Amy Alkon, Palm Beach (FL) Post, 11 Oct. 2002

In truth, the occurrence of the dog doggo hadn't increased in print—it had remained fairly stable for 50 or so years. It's just that lie doggo lost so much ground that we were noticing more of what had always been there.

Doggo remained a casual and occasional word for a dog until 2016, when it became popular as part of the standard vocabulary of one of Twitter's best-loved accounts, 14/10:

Here's a super majestic doggo and a sunset 11/10 pic.twitter.com/UACnoyi8zu

Doggo saw a meteoric rise in use in 2017 and continues its upward trajectory, as the nation turns its lonely eyes to dog pictures for comfort and some much-needed encouragement to carry on.