Does 'Bashful' Mean "Full of Bash"?

It sometimes seems that nothing about our language makes very much sense. If, for instance, disgruntle means “to make ill-humored or discontented,” then must gruntle mean “to make content”? And while we’re on this subject, if a person is bashful ("socially shy or timid"), must that mean that they are “full of bash”? And what is bash, anyway? 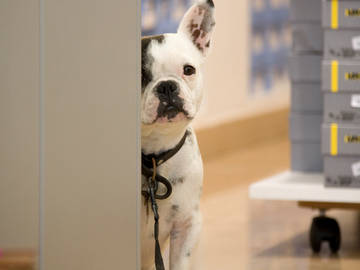 Before we unravel the mysteries of why someone might be full of bash, let’s get disgruntled and gruntled out of the way. Yes, gruntle can indeed mean “to put in a good humor,” but this is a modern sense, introduced in the early 20th century as a back-formation (“a word formed by subtraction of a real or supposed affix (such as a suffix) from an already existing longer word”) from disgruntled. Prior to this, the word gruntle had an entirely different meaning, which was “to grumble.” The reason this creates confusion is that many people assume that the prefix dis- only functions in a negative sense, giving whatever word it is attached to the opposite meaning. However, this prefix may also be used with an intensifying meaning, which is the sense that had previously attached itself to gruntle.

The preceding paragraph may appear to have been a lengthy and unnecessary aside, but it did serve a purpose, which is to remind you that prefixes (and suffixes) do not always behave in the manner that we think they do. Which brings us to bashful. This word is formed, fairly obviously, by combining bash and -ful. So does this word entail being full of bash? That depends on how you look at it.

The common ending –ful has two roles in English: it can serve as a noun suffix or as an adjective suffix. When added to a noun the sole meaning is “number or quantity that fills or would fill” (as in bellyful or mouthful. However, when -ful is used as an adjective suffix it can mean a number of things. It can mean “full of” (as in eventful); “characterized by” (as in boastful); “having the qualities of” (as in masterful); or it may mean “tending, given, or liable to” (which is the sense that bashful uses). So if you are bashful you are not so much "full of bash" as you are "liable to be abashed."

This is the point at which most of us scratch our heads and say “What does bash mean, anyway?”

Bash has a range of senses that most of us are familiar with, such as “a forceful blow” and “a party.” Bashful is not based on any of these; it comes from a thoroughly obsolete sense of bash which meant “to be abashed,” and which came from the Middle English word basshen, a shortening of abasshen. We have been referring to people as bashful since the early 16th century.

Now that the question of whether bashful does or does not mean “full of bash” has been cleared up, the next logical question is "do we have a word for 'empty of bash'"? Of course, for English is nothing if not full of odd words that are seldom used. The word is bashless (“unabashed, shameless”), and it is exceedingly rare. The word began being used in the middle of the 16th century, and does not appear to have survived for more than a hundred years or so before falling into disuse. It is survived by the more recent, yet similarly uncommon word abashless.

Thou breathing forth with bashles brow,
of lewd lyes loe a monstrous heape:
Doost me accuse most wrongfully,
the shame therof be sure to reape.
—Thomas Broke, A Slaunderous Libell, 1570

MORE TO EXPLORE: 8 Words for Introverts