A word eager to transcend its roots

There are certain things in English which, in spite of evidence showing otherwise, have spent hundreds of years being viewed as problematic by many of us (ending a sentence with a preposition is one such example). And there are other questions of usage which were viewed as problematic by a small group of people for a fairly short amount of time before we collectively decided that it wasn’t that big a deal and all moved on. An example of this is the “proper” meaning of the word avid. 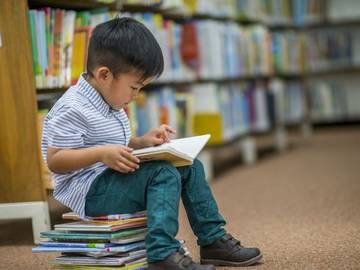 Yes, you do need all those books.

It is likely that most of the people reading this have used avid on occasion (self-describing as ‘avid readers,’ for example) without even stopping to briefly worry that they might be misusing the word. While most people today employ avid to mean “characterized by enthusiasm and vigorous pursuit,” for a while in the late 20th century this sense was viewed as improper.

Avid … should be restricted to the notion of craving eagerly, excessively desirous, greedy.
— John R. Bremner, Words on Words, 1980

We do have a definition for this sense of avid (“desirous to the point of greed”), and it is the oldest meaning of the word, dating in use to the middle of the 17th century.

On the other side an  avid and corrupt conscience is over at war within it selfe, and can never be at rest sléeping or waking, it is alwayes plodding to doe mischief, alwayes doubting what will follow, but never intending to amend.
— Anon., Good counsel to be had at a cheap rate, 1663

In answer to the Objection, we reply, the Advantage of the Procedure, too frequently proves fatal to all the foresaid Interests united, or divided; since, universally the insatiate thirst of Lucre prompts inconsiderately the Avid will to grasp at more then it can regulate, to become sudden Wealthy….
— Leonard Willan, The perfect states-man, 1668

This “greedy” sense of avid illustrates the word’s origins; it may be traced to the Latin avēre (“to desire, crave”). There are a number of other words in English which share this root, including avidity (“keen eagerness,” “consuming greed”), avidious and avidous (both synonyms of avid, predating its use), and avidulous. This last word was memorably defined in 1731 by Nathaniel Bailey as “somewhat greedy,” and does not appear in any current English dictionaries save the Oxford English Dictionary.

Evidence suggests that avid is today most often used with the “very eager and enthusiastic” meaning, rather than “greed,” and in particular is used for describing collectors, fans of various kinds, and those in pursuit of some activity or hobby (such as reading, hunting, or golfing). This word represents yet another case where you may safely ignore the admonitions of usage guides from the 1980s.