A question for the ages

Both "hock a loogie" and "hawk a loogie" are acceptable for describing forcefully spitting out a mass of saliva and phlegm from the throat. Hock and hawk both refer to the action of spitting. 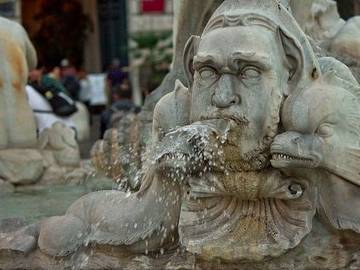 If you're in public, the answer should be: neither.

Some language quibbles are short-lived things; the notion, for instance, that only a house built of stone may properly be called dilapidated, on account of the word having stone roots (it comes in part from the Latin lapidare, "to pelt with stones") has been put to rest. Others, such as whether one should employ that or which to introduce a restrictive clause, have more staying power, and we expect to keep hearing about this for decades to come. We have received an uncountable number of letters (mainly because we haven’t ever bothered to count them) on a topic of similar grammatical weight to the that/which conundrum: is it more proper to hawk a loogie, or should one hock it?

Before we get to the matter of whether one should hawk or hock, what exactly is a loogie? We are so very glad you asked. A loogie is a mass of saliva and phlegm, cleared from the throat and forcefully expectorated. The word is a phonesthemic coinage, with -oog- perhaps coming from bogey "piece of nasal mucus" or from booger, with the suffix -IE. The term for this salivary discharge has been in use since the mid-20th century, and although we give the spelling as loogie (plural form loogies) it must be noted that alternate forms are occasionally found.

Turning now to the aforementioned query posed by the aforementioned uncountable letter-writers, we are glad to report that either hawking or hocking loogies is fine. The use of hawk that is relevant here (not the bird sense, or the one meaning to sell something) is of imitative origin, and means “to forcefully spit out (something, such as phlegm).” The relevant sense of hock (not the one meaning “to pawn something”) is simply a variant of hawk. Please observe that these senses are considered informal, and therefore you may wish to consider an alternative in business correspondence or similar writing.

The effect is as jarring as if the Pope hawked a loogie during mass.
— Barbara Brotman, Chicago Tribune, 1 Oct. 1995

Figure 1. What students do to goof off … Hock a loogey.
— Robert B. Everhart, Adolescence (Rosalyn Heights, NY), Spring 1982

Some are hawking loogies, true, but you're only young once, right?
— Askold Melnyczuk, the Antioch Review, Fall 2014

Now that the usage questions are out of the way, we are free to remind you that regardless of whether you choose to hawk or hock your loogie, please do so in a sanitary fashion, and don’t just spit on a crowded street.