When referring to a change in direction, position, or course of action, the correct phrase is to change tack. This is in reference to the nautical use of tack which refers to the direction of a boat with respect to sail position. This phrase has long been confused as "change tact" but this is technically incorrect.

Do you change tact or tack? If it’s the former, are you actually just using a shortened form of tactics? If it’s the latter, what’s wrong with your tacks that they need replacing?

To use this term in what most people would consider a correct manner you would in fact use tack, but not because you are referencing the small metal pokey thing (not a technical definition)—at least not directly. 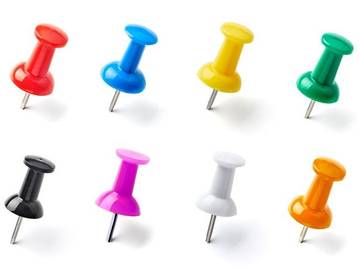 Tack has many possible meanings in English, and several of the more obscure ones are concerned with nautical matters. A tack may refer to “a rope to hold in place the forward lower corner of a course on a sailing ship,” “the direction of a ship with respect to the trim of her sails,” or (among numerous other maritime meanings) “a change when close-hauled from the starboard to the port tack or vice versa.” These senses all came from the same sources as the small nail sense of tack, although are somewhat more recent. We see tack being used in reference to a ship’s direction in the early 17th century.

My Lord Generall appointed some of his Shippes to chace them, who pursued them all night and next day, and fol|lowed them so close as they were forced in the night to fling ouerboord some of their Ballast and their Stuffe, and to put foorth studding Sailes, and goe right before the winde, hauing lost ground vpon a tack and at veering, and so not without difficultie escaped vs.
— Anon., A Iovrnall of all the Proceedings of the Duke of Buckingham, 1627

Before the 17th century was up tack was being used in a figurative manner, “a course or method of action; especially : one sharply divergent from that previously followed.”

Now the Court was certainly making a tack towards the Coast of Italy, and it would not be long be|fore they came to an Anchor in Tyber: for what could make it more clear and manifest, than the Kindness, as well as Indulgence which was shewn to those of that Perswasion?
— Anon., The Established Test in Order to the Security of His Majesties Sacred Person, and Government, and the Protestant Religion against the Malitious Attempts and Treasonable Machinations of Rome, 1679

By the end of the 18th century change tack is found; our earliest record so far of this combination comes from a treatise on sea battles, and is used quite literally, but within a few decades we find evidence of figurative use.

In this situation the ships of the division c d, which we are speaking of, will be able to observe the manoeuvres of the enemy, in order to change tack and form themselves in Order of Battle on the opposite board as soon as the hostile ships shall have, after their bearing away, run over a certain space.
— Jacques-Raymond Grenier (trans. by the Chevalier de Sauseuil), The Art of War at Sea, 1788

I am still in the land of the living, a monument of Divine compassion. It is now in the 60th year since I first entered on the voyage of life, and launched out on the waves of tumult. My first course, under a press of sail, was directly before the wind; nor did I veer a single point, or change tack, or sheet, for twenty years.
— The Methodist Magazine (London, Eng.), Nov. 1810

The speakers and writers of the English language are endlessly inventive and resourceful, not least in our ability to corrupt a word or expression almost immediately after it has become established. Tack begins seeing figurative use in the early 19th century, paired with words such as change, different, or adopt, and before the middle of the century people are already using tact for the same purpose.

But finding herself every where anticipated by her countrymen, and despairing of gaining a knowledge of anything not known before, she adopted a different tact.
— T. R. Edmonds, Court and Lady’s Magazine (London, Eng.), Feb. 1842

B. Hyam would humbly all classes address
On a subject important to all,—which is “Dress!”
Competition runs high; and of “bails” there are some,
To which we should not wish the “public” succumb!
These are “empty professors,” who speak, but not act;
Their method is based on a different tact…
— (advt.) The Manchester Guardian (Manchester, Eng.), 22 July 1843

The substitution of tact for tack may be longstanding and widespread (it is not uncommon to still find its use in edited prose today), but it is widely shunned by usage guides, and if you care about such matters you should probably employ tack when referring to a position or direction that needs changing. In the pantheon of usage quibbles this is a minor one, which gives you all the more reason to pay attention to it: a stickler will be absolutely thrilled to notice and call you on it, and you shouldn’t give them the opportunity.