The answer is waiting for you and it is still hot.

What do you call the meal that you eat at the end of the day? Do you call it dinner or supper? Your answer might depend on where you grew up or how old you are. The words have shifted in meaning as dining habits have changed. 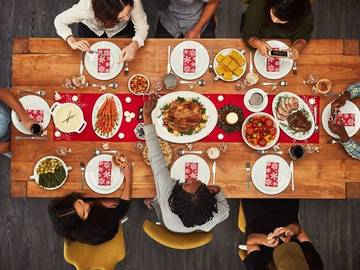 And now onto the main course...

A contemporary restaurant, for example, might indicate its dinner hours as late in the afternoon or during the evening:

The same restaurant might serve lunch during the hours of 11:00 am to 2 pm, or adjust those hours for what it calls brunch on the weekend.

Distinction Between Dinner and Supper

But the use of dinner to refer to the main meal of the day, eaten as the last meal of the day, is a relatively recent phenomenon. For a long time, that main meal was held during the middle part of the day, around or slightly after the time we would nowadays allot for lunch. What was then called supper was a lighter meal taken toward the end of the day.

If you have read the classic children’s book Where the Wild Things Are by Maurice Sendak, you’ll recall that Max is sent to bed without any supper for misbehaving. If you interpret supper as "dinner," you might be left with the impression that Max has been cruelly left to go hungry, but in all likelihood he had already eaten his day’s main meal. When he returns from his rumpus with the Wild Things, that supper is waiting for him in his room and it is still hot.

Many British writers of the 18th and 19th centuries made distinctions between dinner and supper much the way we might today for lunch and dinner.

Whether my lord used to make himself uneasy for want of mine or other company, I cannot tell, but the servants complained every day, as I heard by Amy, that his lordship ate little or nothing, and would sometimes shed tears when he sat down by himself to breakfast, dinner, or supper; and, indeed, I began to think that he looked very thin, his countenance grew pale, and that he had every other sign of a grieved or broken heart.
— Daniel Defoe, The Fortunate Mistress, 1724

It is somewhere about five or six o'clock in the afternoon, and a balmy fragrance of warm tea hovers in Cook's Court. It hovers about Snagsby's door. The hours are early there: dinner at half-past one and supper at half-past nine.
— Charles Dickens, Bleak House, 1853

"So much for Mr. Henry Baker," said Holmes when he had closed the door behind him. "It is quite certain that he knows nothing whatever about the matter. Are you hungry, Watson?"

"Then I suggest that we turn our dinner into a supper and follow up this clue while it is still hot."

“John will show you your room. Supper is at half-past seven. We have given up late dinner for some time now.”
— Agatha Christie, The Mysterious Affair at Styles, 1920

This distinction was used in the United States as well, particularly among farming communities in the Midwest and South, and the terms dinner and supper were treated distinctly in works by American writers into the 20th century:

After the ceremony at the church, the party went to a dinner given by the parents of the bride. The dinner lasted all afternoon; then it became a supper and continued far into the night.
— Willa Cather, My Antonia, 1918

Breakfast was our principal meal; midday dinner, except on Sundays, and supper were casual menus, often composed of leftovers from the morning. These breakfasts, served promptly at 5:30 A.M., were regular stomach swellers.
— Truman Capote, “The Thanksgiving Visitor,” 1967

In Christian theology, the term supper brings with it a suggestion of finality. The most famous supper, known as The Last Supper and immortalized in art by Leonardo da Vinci with that title, came when Jesus ate with his apostles before his crucifixion, laying the groundwork for the tradition of the Eucharist.

Likewise also the cup after supper, saying, This cup is the new testament in my blood, which is shed for you.
— KJV Luke 22:20

And supper being ended, the devil having now put into the heart of Judas Iscariot, Simon's son, to betray him; ...
— KJV John 13:2

A clue to the historical role of supper is given in its etymology. Both supper and dinner have closely related verbs in English: sup and dine. Dinner derives via Middle English from the Anglo-French verb disner, meaning “to dine.” The comparable etymon for supper is the Anglo-French super, meaning “to sup,” related to supe, the noun for “soup.” The typical meal prepared for supper was something of a light repast akin to soup—perhaps something that could be left to simmer on the stove throughout the day.

So what changed to make the evening hour the dinner hour? People’s daily schedules, for one thing. As historian Helen Zoe Veit notes at NPR.org, with the rise of industrialization, more Americans began working outside the home and couldn’t return to eat their main meal in the middle of the day.

So what was known as dinner got shifted to the evening, when those workers returned home, and we adopted lunch for the light midday meal in its stead. We most likely get the word lunch as a short form of luncheon, and luncheon as an alteration of nuncheon, referring to a light snack. That word’s history pins it to its hour of taking place. The Middle English nonshench, used for a midday refreshment, was formed from non, meaning “noon,” and schench, meaning “drink.”

It is logical, then, that speakers of certain generations, used to referring to supper as a day’s last meal, carried that word over for the main meal of the day taken in the evening, thereby leading to its conflation with dinner.

Now, we hope you saved some room for dessert.