What Counts as Dessert?

Is a granola bar dessert? What about cheese?

The dictionary has been dragged into a number of gastronomic arguments recently. The most current controversy is raging thanks to a New York Times piece that claimed a granola bar was dessert. Online publication Mic strongly objected, and began their case against the New York Times with some dictionary definitions:

Dictionaries don't support the theory that a granola bar is a dessert. According to Merriam-Webster, dessert is "a usually sweet course or dish (as of pastry or ice cream) usually served at the end of a meal." A granola bar, meanwhile, is defined as "a bar made of a mixture of oats and other ingredients (such as brown sugar, raisins, coconut, or nuts) that is eaten as a snack." 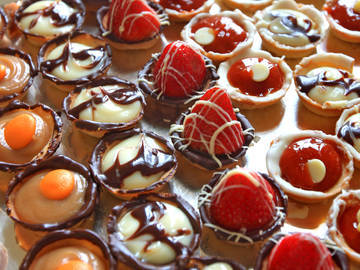 Dessert is "a usually sweet course or dish (as of pastry or ice cream) usually served at the end of a meal." Usually.

Dictionary definitions are written based on a word's accumulated use in print. But going through some of that use, you find that people use words with some degree of lexical inexactness—even when it seems clear what the word should mean.

Dessert is an excellent example. Look closely at the definition for dessert that's given above, and you'll see a word that should give pause. The word is usually.

Lexicographers need to write definitions that are broad enough to cover the main uses of a word, and they sometimes need to use modifiers like usually or sometimes to broaden the definition. Dessert refers to a course or dish that's usually sweet, because of uses like this:

From the French came such delectable dessert types of cheese as Roquefort (American Blue), with its delicate veins of blue mold, and also Camembert.
—A World of Wisconsin Cheese, March 1979

Neither Roquefort nor Camembert cheese is at all sweet, yet they (and other decidedly non-sweet cheeses) are called dessert cheese because they can be served as the final course to the meal. This isn't the only citation we have in our files that refers to serving cheese or nuts or something that is not sweet as dessert. We use the usually in the definition to allow for these many uses.

And what about this:

IRISH COFFEE
A beverage that doubles as dessert, served in a stemmed glass. For each serving you will need: 3 small lumps of sugar, 3/4 cup hot coffee, 1 oz Irish whiskey and whipped cream to float on top.
—The Encyclopedia of Cooking, 1985

Is alcoholic coffee a course or a dish? Probably no more so than a granola bar is a course or dish, yet here it is, doubling as dessert.

When Maggi started cooking about three years ago, her motivation was simple. "I wanted dessert for dinner, so I started making it."
—Tracy Hobson Lehmann, San Antonio (Texas) Express-News, 13 Jan. 2013

There are even less ambiguous uses in our files: "have dessert first," "ate dessert for breakfast," even a reference to candied yams, that American Thanksgiving favorite, as a dessert—though candied yams are typically eaten during the dinner portion of the meal.

Of course, most of the citations we have in our files are for the standard sweet-after-dinner meaning that Mic is thinking of. The usually in the definitions let us include these numerous citations that stray further afield from the standard meaning.

So while Mic is drawing a hard gustatory line in the sand, the reality of what's considered a dessert is much hazier. Is a granola bar a dessert? Usually not, but it could be.