This is just to say / Don't confuse these

Plum and plumb and plump look like siblings (or at least cousins), but confuse them at your peril: they're not the same at all. 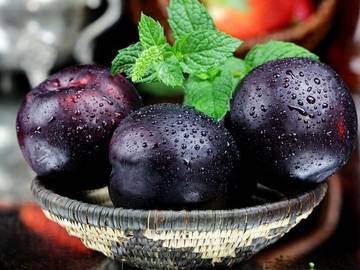 so sweet / and so cold

Plum is only ever a noun (though it's a noun with adjectival tendencies). It's the fruit and the tree that fruit grows on (which, incidentally, is part of the rose family). When the fruit is dried it's called a prune, which our very reliable grandparents assured us was essential for health.

Plums being sweet and all, it's plum you want when you're describing what sweet informally also describes: a plum deal, a plum job, that plum apartment. We agree that it looks very adjectival here, but it's more properly considered an attributive noun. (One tip-off that it's not an adjective is that we don't say "that job is plum"; instead we use plummy.)

Plumb is the word that has to do with your pipes and plumbing. That b is silent, making plumb sound identical to the name of the fruit. While the b does helpfully signal in print that the words are different, we will note here that the b was not natural to the English word, but was bestowed by some scholars who wanted the English word to look more like its Latin ancestor, plumbum, meaning "lead." Thanks, guys.

Plumb as a noun refers to a lead weight that's attached to a line and used especially to indicate a vertical direction. It's often used in the phrases "out of plumb" and "off plumb" to mean "out of vertical or true," or "not precisely vertical."

Unlike plum, plumb hasn't been satisfied with simple noun use. No, the word functions also as an adverb, a verb, and an adjective. The adverb has the literal use of "vertically," as in "a rope hanging plumb," but gets applied figuratively and informally too with the meanings "absolutely," as in "plumb wrong," and "exactly," as in "plumb in the middle." Its verb use is mostly limited to two kinds: those to do with the very concrete tasks of installing pipes and connecting fixtures (as in "plumbing a new house" and "plumbing the bathroom fixtures"), and those that are metaphorical extensions of the lead weight especially as it's used to determine water depth on sounding lines: a play that "plumbs the depths of human nature" fully examines human nature; if a stock "plumbs new depths" it reaches a new lowest value. As an adjective, plumb mostly is used to mean "exactly vertical," as in "a plumb wall."

And then there's plump.

It sounds different, what with that final \p\, but it looks awfully similar, and it has some meanings that make it ripe for confusion with the others. Like plumb, plump functions in multiple ways. It's mostly known for its adjective use meaning of "having a full rounded usually pleasing form," as in "plump cheeks," but it's a verb, twice over—by which we mean there are two verbs plump that are etymologically unrelated. The oldest meaning of plump, having to do with dropping, sinking, or placing suddenly or heavily, as in "they plumped down in the chair" and "she plumped the bags down onto the bench," is one of these. The same verb is used figuratively, especially with for, to talk about expressing support for someone or something, as in "plumping for the incumbent candidate," or in British English, to choose something or someone after careful consideration, as in "plumping for the cake rather than the pie." The other verb has to do with making or becoming plump, as in "plumping the pillows/cushions."

Quite obscure are two noun uses of plump, one referring to a sudden plunge, fall, or blow, or to the sound such a plump makes ("the plump of stones falling into the water"), and the other referring to a group or flock, as in "a plump of ducks."

Also obscure but trickier is the adverbial plump: it means "with a sudden or heavy drop," as in "landing plump on the floor," as well as "straight down" ("falling plump to the bottom") and "straight ahead" ("standing plump in the path"). It's also used to mean "directly" or "without qualification," as in "say it plump and plain." But none of these are common in current use.

In summary, here are the most common uses of each: plum refers to a fruit and describes pleasant things; plump describes full, rounded forms; and plumb is a versatile word with verb meanings having to do with plumbing and deep examination and experience, adjective and adverb meanings having to do with verticality, and informal use as a synonym of "absolutely" and "exactly." We never said English was easy.