Ascent is a noun meaning "the act of rising or mounting upward," and the the verb form is ascend. A simple device to remember is that “climb” and "ascent" both have the letter C. On the other hand, Assent functions as a verb meaning “to agree to or approve of something especially after thoughtful consideration,” or a noun defined as “an act of assenting.” 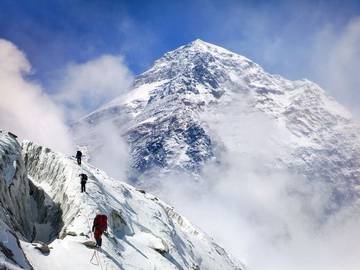 And are you sure you don't want to just take a nap instead?

In agreeing to climb a mountain you are assenting to make an ascent. Those of you who scoff at the notion that anyone could make so simple an error as to confuse two words which just happen to be spelled in similar fashion and are pronounced the same need read no further; you may go climb a mountain. Those who do have trouble distinguishing between these words need feel no shame, for you have plenty of company (particularly in the misuse of ascent for assent).

Father Conroy said at the time of his conversation with Mr. Burks, he believed that he had no choice but to resign. His letter invited Mr. Ryan to invoke his powers to dismiss him but says he will not ascent to a voluntary departure.
— Byron Tau, The Wall Street Journal, 3 May 2018

You nod in ascent, and he stirs raw minced garlic into the small bowl of sesame sauce in front of you.
— Jonathan Gold, Los Angeles Times, 31 Oct. 1991

And what did the customer have to do to agree or ascent to those terms and conditions?
— Drew Hasselback, National Post (Toronto, Can.), 6 Sept. 2014

Assent used where ascent is called for is not quite as common, but may be found often as well.

Two of the wineglasses had broken during the somewhat arduous assent, but we delighted in the fact that two remained intact (one for each couple).
— Rose Levy Berenbaum, The Record (Hackensack, NJ), 27 Nov. 1994

In those seven hours, they had traveled up and over Kahili Mountain and then began as assent up the next mountain.
— Brittany Lyte, Honolulu Star-Advertiser (Honolulu, HI), 23 Sept. 2015

How to Use Assent and Ascent

Assent may function as a verb or a noun. The verb has the meaning “to agree to or approve of something (such as an idea or suggestion) especially after thoughtful consideration,” and the noun is essentially defined as “an act of assenting.” Ascent only functions as a noun; the verb form is ascend. If you need a simple device to tell the difference between them simply remember that the word meaning “climb” has a C in it.