'Crevice' and 'Crevasse': A Gap in Meaning

Look before you leap.

Crevice and crevasse are very similar words: they both derive from the Old French crever, a verb meaning "to break or burst," and both refer to an opening of some kind. In fact, you can say that the only notable distinction between the two is the size of the openings they denote. 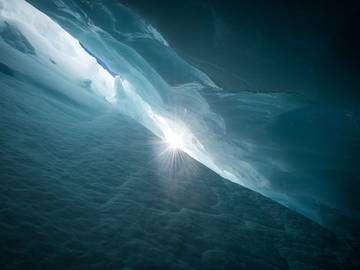 A crevice is a narrow opening resulting from a split or crack. Mostly we find them in rocks, walls, or cliffs:

All the other 325 known species of anglerfish … sit in the open and attract prey with a lure. H. psychedelica has no lure. Instead, it hunts by squeezing itself into tiny crevices where small fish hide.
— Caroline Williams, New Scientist, 16 May 2009

One particular type of ladybug, the multicolored Asian lady beetle, has developed the rude habit of invading houses in chilly months, entering through cracks and crevices to find a warm place to curl up for the winter.
— Don Finley, The San Antonio Express-News, 27 Dec. 2004

Some writers use the word to refer to similar openings found in other materials:

These [cinnamon] rolls are fluffy, soft and deliciously rich. The cream cheese icing pairs so well with them and oozes into every crack and crevice, making every bite divine.
— Audrey Alfaro, The Spokesman-Review (Spokane, Wash.), 19 Dec. 2017

Then the bug crawls back into its hiding place to digest the meal. Its flat body enables it to hide in tiny crevices in mattresses, box springs and bed frames.
— David Downey, The Press-Telegram (Long Beach, California), 15 July 2017

And there are non-literal uses of the word:

The canvases in “Running Rabbits” are lavish, layered, and dazzling — almost like visual jewels — but they're also anguished and dissonant as they get into the complicated crevices of history and memory.
— Jonathan Curiel, SF Weekly, 10 Jan. 2018

These [cinnamon] rolls are fluffy, soft and deliciously rich. The cream cheese icing pairs so well with them and oozes into every crack and crevice, making every bite divine.
— Audrey Alfaro, The Spokesman-Review (Spokane, Wash.), 19 Dec. 2017

Crevasse refers to a deep hole or fissure in a glacier or earth. In most instances, the word appears with enough context that its deepness is easy enough to figure out:

This is how John All, co-author of Icefall: Adventures at the Wild Edges of Our Dangerous, Changing Planet, describes the moment after he plunged 70 feet into a crevasse in the Himalayas. Alone, and with a dislocated shoulder, he had to haul himself from ledge to ledge toward the surface, using only one arm.
— Simon Worrall, National Geographic, 7 May 2017

Because crevice is arguably the more familiar of the two words, some writers will occasionally use it in place of crevasse, even when it is apparent that a deep hole, rather than a narrow or shallow fissure, is what is being described:

Their mother, a schoolteacher, and father, a shoemaker, likely fell into a crevice of the glacier, where their bodies were preserved.
— Zoha Qamar, CNN.com, 19 July 2017

One way to remember the distinction between crevice and crevasse is that i (as found in crevice, the smaller hole) is a thinner letter than a (as found in crevasse, the larger hole). Or, should you step into a crevasse, perhaps you'll have time for a lot of "Ahhhs"?