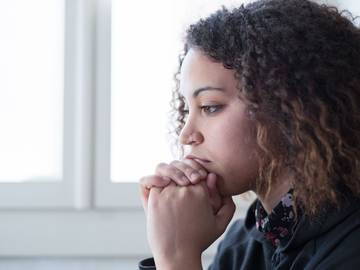 'Concerning' tends to have less threatening connotations than analogous words like 'alarming' or 'distressing.'

First, a refresher on participles. There's the present participle, which has the ending -ing, and the past participle, usually ending in -d or -ed. The present participle is sometimes used as an adjective for something that causes a certain feeling or emotion to overcome a person or animal—for example, when a person describes a clown as "frightening," that person is saying that the clown is making them afraid. On the other hand, the past participle is used as an adjective to describe a person or animal that has been caused to experience a certain feeling or emotion, as in "the frightened dog," which means someone or something (probably a clown) has made the dog afraid. Both participles are from the transitive sense of the verb frighten. (Transitive verbs have objects; the implied person and the stated dog in our examples are the objects that are frightened.)

Concern is also a transitive verb relating to feeling or emotion, as in "The child's behavior concerns the parents" (the object being "parents"). It is from its past participle that we get the adjective concerned, as in "concerned parents." By rule, the present participle can also be applied as an adjective—and it has been since the 17th century, when it appears with the meaning "important," in constructions such as "a very concerning question to ponder." A century later, concerning could also mean "giving cause for concern." Inexplicably, the adjective falls into disuse by the 20th century. By that century's end, however, it experiences a revival—to the chagrin of those who strive for clarity.

The objection to the adjective relates chiefly to statements like "The text message was concerning" that become cliff-hangers for those expecting an object to follow the verb. "Concerning what?," they ask (often with an exclamation point added for emphasis and in frustration). In addition, they might point out that concerning is being mistakenly used for disconcerting, meaning "disturbing" or "upsetting." (It's likely that rewording our example to "a concerning text message" would have avoided this chiding altogether.)

Concerning could very well be considered an eggcorn of disconcerting. In statements like "The text message contained some concerning content" or "It's concerning that the building failed inspection," it certainly can be argued that disconcerting is being misinterpreted as concerning. However, usage evidence shows a trend of people using the adjective concerning, meaning "giving cause for concern," without concern of being criticized.

As unnerving as driverless cars may seem, change can be hard for many people to accept. ... Just consider how many people find it concerning every time Apple changes its charging cord on the iPhone. Yes, it's concerning. But, we adapt … because we have to.
— David Sturt and Todd Nordstrom, Forbes, 14 Apr. 2017

One reason for the uptick in use may be the word's softer and less threatening connotation in contrast with analogous words like alarming, troubling, and distressing. When an issue is said to be "concerning," it's worrisome but the notion of an alarm calling for immediate action doesn't usually come to mind.

In many cases, says [Martin] Taylor, the conservation status of the region's birds is directly linked to human demands on resources that drive expanded agricultural programmes, afforestation, mining and urban growth. "Habitat loss is one of the most concerning threats while pollution from agriculture, mining and manufacturing centres are just as concerning."
— The Independent Online (South Africa), 10 Mar. 2018

We have no reason to criticize use of the present participle concerning as an adjective, as its formation and application are in line with others of its type. However, we do recommend avoiding its placement at the end of a sentence, especially in formal writing. Not everyone is familiar (or accepting) of the adjective, and not everyone will realize that you intentionally placed that period as a style choice, rather than a typo. They may just think you're trying to clown them.