The distinction between the two is clear (now).

Both words come from the Latin complēre (meaning "to complete"). Complement refers to something that completes something else, while compliment has branched off to mean a remark "especially in the form of admiration, esteem, or approval," such as when paying someone a compliment for an achievement or for how they look.

Oh, English. You're such a wily creature.

If we can agree about that remark expressing admiration (rest assured, it does), do we call it a complement? Or a compliment?

The correct word is compliment, but complement finds itself plunked into such contexts from time to time, making this confusion between the two words a matter worth our consideration. 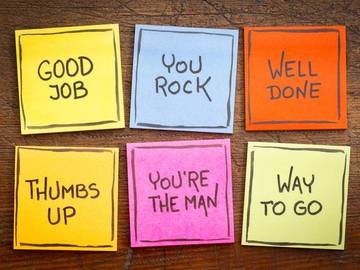 So let's get to considering.

Both compliment and complement ultimately have their roots in the Latin word complēre, meaning "to complete." The word complement took a rather direct route, entering Middle English from the Latin complementum, which itself came directly from complēre. Compliment, on the other hand, came to English from Middle French by way of Italian and a Spanish word meaning "to be courteous" and "to perform what is due," that Spanish word being a modification of complēre.

Compliment is the more common of the pair. Its etymological ties to courtesy are evident in its modern use, where as a noun it most often refers to a remark that says something good about someone or something, and as a verb it communicates the expression of such a remark. We compliment someone on something they've done—"What a beautiful drawing!"—by offering them a compliment: the statement about the beautiful drawing.

And that's really the crux of it: complement is about completing, and compliment is about courtesy especially in the form of admiration, esteem, or approval.

How neat and tidy it all is! How this pair seems to challenge that "wily creature" characterization of the English language! Except, um, we've left something out. We do hope it won't be too devastating. Here goes: the verb complement has an obsolete meaning synonymous with compliment, and another obsolete meaning of "to exchange formal courtesies." And the noun complement too has wholly inappropriate (given the word's modern functions) obsolete meanings, among them "a social quality of accomplishment" and "something added for ornamentation." The only comfort we can offer in the face of such facts is this: English speakers were mostly done with all of these by the end of the 17th century.

English really is a wily creature.

In summary: If one thing complements (with an "e") another, it completes that thing (e.g., the shoes complete your outfit, or make it perfect). Complement comes from the Latin word for complete.