Amber, Auburn, Crimson and Other Colorful Words for Autumn Foliage 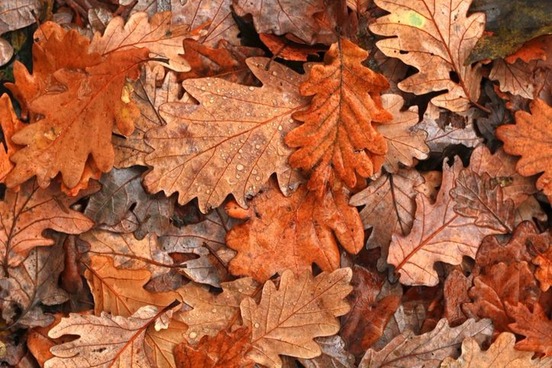 To make a countryman understand what feuille-morte­ colour signifies, it may suffice to tell him, it is the colour of withered leaves in autumn.
— John Locke, An Essay Concerning Human Understanding, 1690

In French, the term literally means "dead leaf." In English, feuille morte refers specifically to a brownish-orange or yellowish-brown color. Its use is rare, but it has not been entirely forgotten by English writers.

She took out a new suit. It was of grosgrain, a shade called "feuille morte," a vivid yellow-brown trimmed with darker bands of velvet.
— Anya Seton, The Turquoise, 1946

The synonymous derivative, philamot, can also be used to describe the brownish, yellowish colors in autumn foliage. Speaking of which, feuille is related to the word foliage. 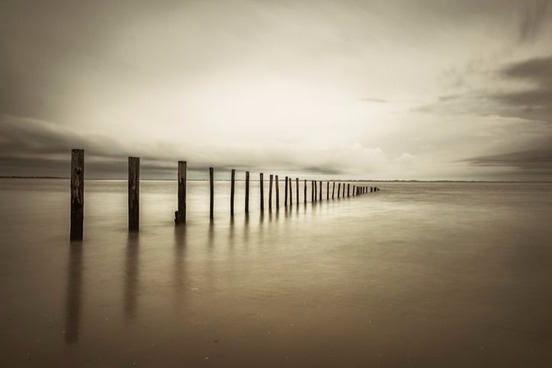 However, tannins are also present in the growing season and they become evident as soon as the chlorophyll starts disappearing. Thereupon, their effects may blend with those of other pigments, making some of autumn’s most painterly tinctures: brackenish sepia and tortoiseshell, mushroomy buff and peach-tinted parchment, burnished copper and ferrous red, bitter chocolate and black cherry, caramelised bronze and honeyed old gold.
— Mark Griffiths, Country Life, 27 Oct. 2018

In modern English, sepia is best known as the name for the brownish tone that makes photographs look vintage. Sepia hues can be found in an autumn leaf—and in the ocean.

Originally, the word was applied to the cuttlefish, a creature related to the squid and octopus that, when alarmed, releases an inky secretion. In the 19th century, watercolor painters began using said secretion to create a rich, brown pigment, which became known as sepia. A common description of the color is brownish gray to dark olive brown. 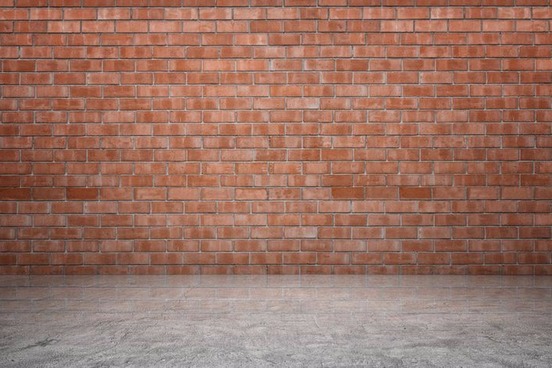 I found no pleasure in the silent trees, the falling fir-cones, the congealed relics of autumn, russet leaves, swept by past winds in heaps, and now stiffened together.
— Charlotte Brontë, Jane Eyre, 1847

The oaks are yet to make their move to russet. Because of the emerald ash borer, their claret foliage may be missing from the landscape.
— Robert Miller, The Litchfield County Times, 9 Oct. 2019

Being a reddish brown, russet is a popular fall color. Its name is a borrowing of an Anglo-French adjective, meaning "reddish" or "reddish-brown," that came to designate a coarse, homespun cloth used to make garments. English borrowed the French term for the cloth in the 13th century before using it in its color sense.

Association of the word with rural living led to its use as an adjective meaning "rustic," "homely," and "simple." For example, Shakespeare's character Berowne in Love’s Labour's Lost, frustrated by Rosaline's literal interpretation of his words, swears off courtly wooing and decides to answer simply in "russet yeas and honest kersey noes."

In the 17th century, russet was planted in the field of agriculture as a name for pears and apples with rough skins of a russet color, and again in the late-18th century when it became the name of the popular potato. 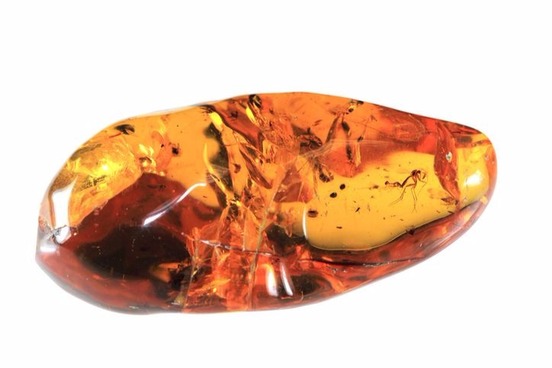 The likely last nostalgic warmth of autumn / has gone by, the amber leaves / have fallen from the mountain ash, and still / luminescent berries / hold their positions on the chill, stiff branches....
— Robert Pack, "Mountain Ash Without Cedar Waxwings," 1993

Amber can describe the dark orange-yellow color of a floating leaf or a substance found floating in the sea. It is derived from Arabic, anbar, which refers to ambergris, a waxy secretion (there's that word again) of the sperm whale that is used as a spice and in perfumery. In English, amber was originally used as the name for this substance, with the name ambergris developing later in French from ambre and gris ("gray") to differentiate it from the fossilized tree resin type of amber, which is also found around the shore (of the Baltic Sea, largely).

Species of insects and plants have been found as fossils in this yellowish to brownish amber, and deeply colored, translucent pieces are used in making jewelry and ornamental objects. It is from the color of this resin that amber has come to refer to a dark orange yellow. 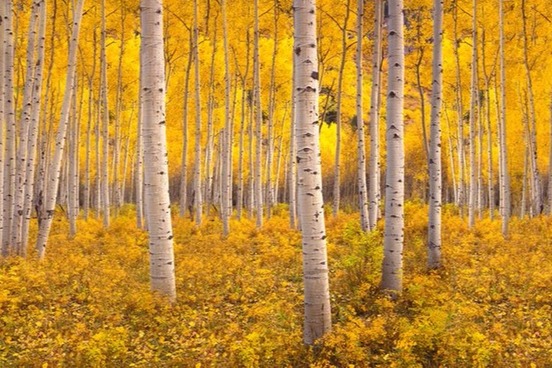 The ceaseless creasing of the morning sea, / the fluttering gamboge cedar leaves allegro, / the rods of the yawing branches trolling the breeze....
— Derek Walcott, The Prodigal, 2004

Gamboge, also spelled camboge, can be used to describe the vivid yellows of autumn. The name of the color refers to a gum resin from southeast Asian trees that is used as a yellow pigment in art and as a purgative in medicine. The resin is orange to brown in color but when pulverized turns bright yellow.

Gamboge is based on New Latin gambogium, an alteration of cambugium, which is either from or akin to the Portuguese name for the country of Cambodia, Camboja. Cambodia also happens to be one of the countries in which the trees producing gamboge are indigenous. 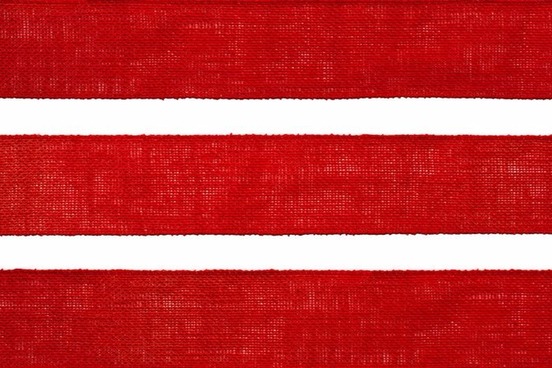 … the trees were dropping golden, amber, and scarlet leaves, while under the pale yellow ones which rustled beneath the chestnut-trees, there were brown, glossy nuts….
— Frances Hodgson Burnett, In Connection with the DeWilloughby Claim, 1899

Scarlet was not originally a word for a color but a name for a high-quality cloth, which is believed to have originated in Persia where it was called saqalāt. The word entered English via Anglo-French escarlet—a derivative of the Latin word for the cloth, scarlata—and became associated with bright red colors because the cloth was commonly dyed red.

In the 17th century, scarlet became an adjective to describe a glaringly offensive sin. That sense of the word originated from a biblical verse in the Book of Isaiah: "Though your sins be as scarlet, they shall be as white as snow." Its use to describe sexual immorality developed from the image of the harlot "dressed in purple and scarlet" in the Book of Revelation.

As always, however, don't read the comments: scarlet is a perfect descriptor for the bright reds of autumn. 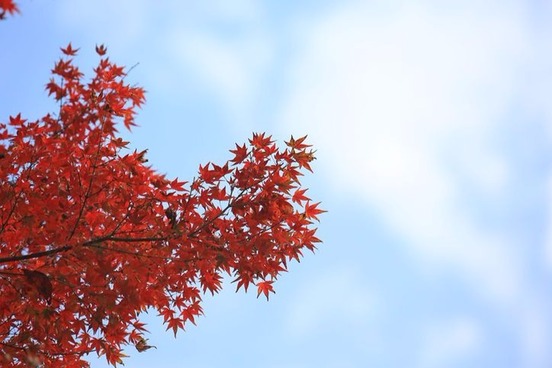 I have tried to delay the frosts, I have coaxed the fading flowers, I thought I could detain a few of the crimson leaves until you had smiled upon them; but their companions call them, and they cannot stay away.
— Emily Dickinson, letter, 1851

An imperial garden in northwestern Beijing that dates back to the 12th century, Fragrant Hills is filled with forest-lined hiking trails that lead to manicured gardens and traditional buildings. Ablaze with crimson leaves in the autumn, it’s considered the best place in China for fall foliage.
— Kristi Kellogg and Peter Nosal, Conde Nast Traveler (www.cntraveler.com), 4 Oct. 2019

Crimson and carmine, words for deep reds, are doublets from the same Arabic source. The color crimson is a deep purplish red that is found in a dye made from pulverized kermes, or the dried bodies of insects. The name of the color and of the insect has been traced back to qirmiz, the Arabic name for the insect. The word crimson entered English in the 15th century via Old Spanish cremesín.

In the 18th century, carmine arrived in English via French as a synonym of crimson. The French derivative is from Medieval Latin carminium, which has also been traced to Arabic qirmiz. The Latin form was more than likely influenced by minium, which refers to an artificial red sulfide once used as a pigment.

Like scarlet, crimson has figurative use associated with sin that originated in the Book of Isaiah via a continuation of the verse quoted above: "Though your sins be as scarlet, they shall be as white as snow; though they be red like crimson, they shall be as wool." In particular, crimson has come to describe acts of bloodshed. William Shakespeare used the word with such connotation in Richard II:

If not, I'll use the advantage of my power and lay the summer's dust with showers of blood Rain'd from the wounds of slaughtered Englishmen; ... It is such crimson tempest should bedrench ... fair King Richard's land.

Considering this bloody figurative sense of crimson and the fact that crimson and carmine are connected to a dye made from dead insects, it seems applicable to use both words during the spookiest time of the year. 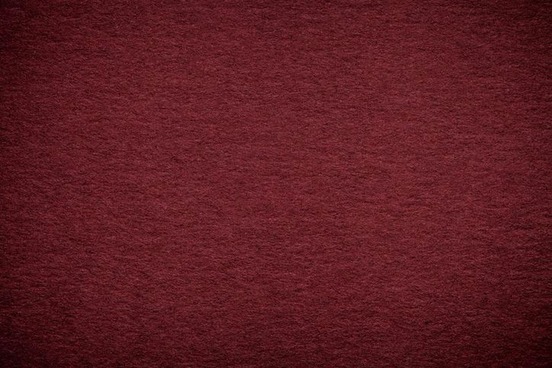 The leaves had already turned and were falling off the trees like a rain storm—beautiful brown, yellow and maroon leaves all over the ground.
— Wilmer Todd, The Daily Review (Morgan City, Louisiana), 28 Sept. 2012

Maroon, as the name for a dark red color, derives from French marron, which is the Spanish name for a chestnut. The earliest examples in English of the word refer to the reddish-brown nut, with the color sense dating from the late-18th century.

Before becoming a color name, maroon referred to a loud firework. Supposedly, people associated the noise of a chestnut bursting in a fire to an exploding firework. Most notably, maroons were used during World War I as a warning to take cover because of an approaching air raid.

The other maroon in the English language, referring to a stranded person, is suspected of being derived from French maron, meaning "fugitive." 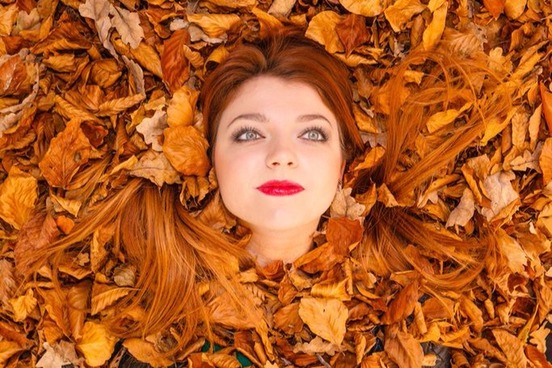 The trees were blazing with autumn; red and gold and auburn leaves littered the ground like a many-hued carpet that crackled and rustled as they hiked along.
— Ben Bova, Return to Mars, 1999

Prior to the 16th century, auburn would not have been an ideal word to describe an autumn color. It derives ultimately from the Latin word albus, meaning "white," and originally designated a yellowish or brownish white color.

However, by the 16th century, the word's meaning shifted to goldish and reddish shades of brown. It seems variant spellings of the word, such as abrune, abroun, and abrown, that resembled Middle English brun, meaning "brown," brought on the color change. 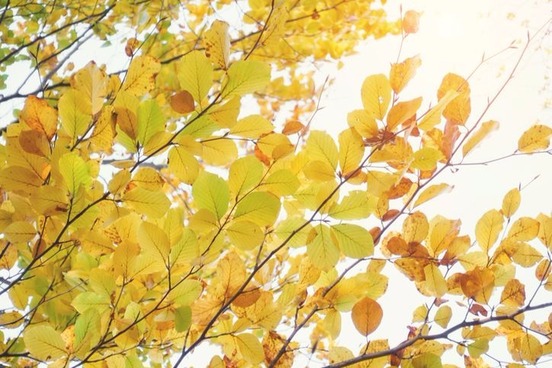 A rain of lurid leaves falls thro' the air. / And lies in drifted heaps upon the / ground; And thro' the hawthorn hedge with murmuring sound / Of sorrow keen, the wind bemoans the fair / Dead summer days.
— John Luther Brenizer, "An Autumn Idyl," 1897

The ghastly history of lurid makes it a fitting adjective for dying pale-yellow leaves. It is from luridus, the Latin word for such a color, and in the 17th century, it was used to describe the pale yellowish color of diseased or bruised skin.

Bruises tend to have a contrast of light and dark color, and such interplay of color may have influenced the word's sense referring to an eerie, red, fiery glow as seen through smoke or cloud.

The sun, shining through the smoke that drove up from the tops of the trees, seemed blood red, and threw an unfamiliar lurid light upon everything.
— H. G. Wells, The War of the Worlds, 1898

The unearthliness of things said to be lurid more than likely led to the word's figurative use for things shocking and sensational, like lurid headlines or the lurid details of a murder. 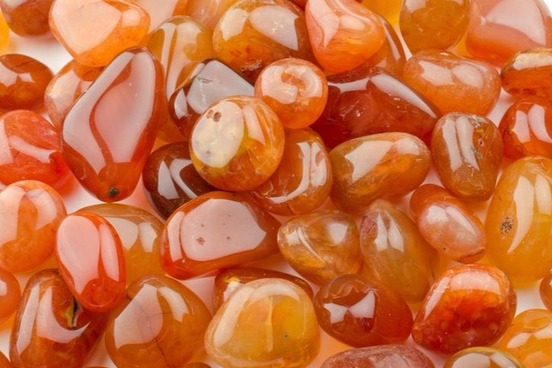 ... a shimmering mass of cornelian leaves, dripping and moist with the rain.
— Agnes Newton Keith, The Land Below the Wind, 1939

Carnelian can be used to describe leaves having a reddish-orange or brownish-red color, like the colors often found in the quartz by that name.

Carnelian is an alteration of cornelian that is based on Latin carn-, meaning "flesh," in reference to the flesh-red color that some perceive in the mineral. Cornelian itself is believed to derive from French cornele, the name for the cornel cherry, and so named because of its resemblance in color to the fruit. 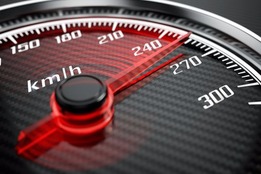 Up Next
All the Way: Words for When You're Not Holding Back
More Words At Play