What do we mean when we speak of climate? Well, as with so many words that are found in the polysemous mess that we call English, it depends. We may be referring to specific weather-related conditions in a particular area, or to one of a number of more figurative definitions. 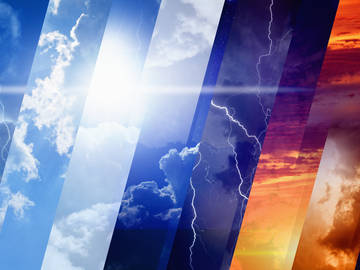 The climes, they are a changin'.

Climate came into our language through a traditional route: our Middle English borrowed it from the Middle French (promising that we’d pay them back sometime in the 20th century). The Middle French took it from Late Latin (Late Latin was probably having an argument with Middle Latin, and got distracted); Late Latin won it off Greek in a game of dice (cheating, as Late Latin always does).

The Greek word that we trace climate from was klima, which means “inclination,” “slope,” or “latitude” and klima can be traced further still, to the Greek klinein, “to lean”. There was a theory in antiquity that the world could be divided into seven distinct zones called climates, which were designated based on the slope or inclination of the northern celestial pole changing as one moved north from the equator. Climate was in use in English for well over a hundred years before we began to use the word in the 16th century to refer to weather conditions.

….the marchants of England that shall trade hereafter thither, partly by certaine secrete comodities already discouered by your seruants, & partly by breeding of diuers sorts of beasts in those large & ample regions, & plainting of such things in that warme climat as will best prosper there, & our realme standeth most in need of.
René Goulaine de Laudonnière, A Notable Historie (trans. by R.H.), 1587

Once climate was applied to weather, it did not take very long before we began to employ the word in a figurative fashion. From the middle of the 17th century on we have considerable evidence of people using climate as a synonym of atmosphere (in the non-literal sense of that word).

….the Meridian of those Primitive-Church times; yet may, doth, without much observable difference, serve generally for great Britain, and the Climate of our English Church and State….
—John Clarke, Leaven, Corrupting the Children’s Bread, 1646

Insomuch that by the King's command hee beeing enforced to leave the agreeable Climate of the Court, it was no difficult matter to perswade the imprudent Almeria to transvest her self and follow him, judging that in that habit every one would take her for mee.
—Jean-Pierre Camus, Nature’s Paradox (trans. By M. Wright), 1652

The words, as appears by the coherence, are principally calculated for the Climate of persecution, when men suffer for righteousness sake, and enjoyn all a free and fearless profession of the Faith, when called thereunto.
—Thomas Fuller, A Triple Reconciler, 1654

In modern use climate is often found paired with change. This compound noun (climate change) may be defined, in brief, as “a change in the climate of the earth; specifically: global warming.” Our use of climate change is not particularly new (the Oxford English Dictionary has citations for its use since the middle of the 19th century), although it has seen considerably more use in recent decades.

In case you were wondering, yes, climate and climax do share origins, the aforementioned Greek word klinein. Since one of the English meanings of climax is “the point of highest dramatic tension or a major turning point in the action of a play, story, or other literary composition,” we will declare this sentence to be the climax of the story of climate, and end on a note of dramatic tension.