Clean is the basic English word meaning “to rid of dirt or impurities.” Sanitize derives from the Latin word for “healthy” and brings the idea of sterilization needed in medical environments, and disinfect usually means to kill germs by chemical means. 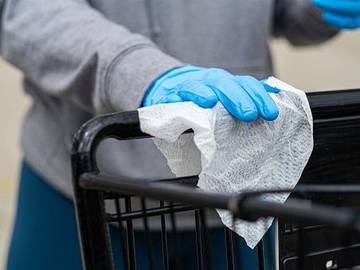 'Sane' (at the root of 'sanitize') originally referred to physical health.

There are some ideas for which English seems to provide nuance to the point of redundancy. Think of our words for large, for example, including huge, giant, big, enormous, gigantic, gargantuan, ginormous, colossal, and massive. It might be said that, though shades of meaning certainly exist among these terms, it can often be hard to distinguish one synonym clearly from another. Sometimes, though, such richness of vocabulary accompanies differences that are critical for medical or scientific reasons.

The Meaning of 'Cleaning'

Take our words for clean, for example. At its most basic, clean means “free from dirt or pollution,” and goes back to Old English as an adjective meaning “clear” or “pure.” Its original verb form (“to make clean”) was cleanse, with the synonymous verb to clean entering the language centuries later, in the 1400s. The fact that we have both clean and cleanse as verbs may seem like an oddity (just one of countless oddities) in the development of English, except for the fact that fluent speakers consistently use them to mean different things: we clean our rooms but we cleanse our souls. Clean is much more frequently used, and is less specific than the more metaphorical and medical cleanse.

To get even more technical and specific, we turn to the Latin-based word sanitize. This follows a venerable pattern in English: more basic, familiar, and household terms have come down to us from Old English, while more technical, scientific, and legal terms—even if they are near synonyms—come down to us from Latin. These distinctions are so natural that we make them unconsciously, but, again, English speakers usually use these near-synonyms in different settings and circumstances:

Another of these pairings is clean (or wash) and sanitize. Clean comes from the Old English word for “pure,” and sanitize derives from the Latin word for “healthy,” sanus, the same root that gave us the words sanity, sane, sanitary, and sanitation. Sanity is the oldest of these words in English, and it originally meant “healthy,” starting in the mid-1400s, before coming to mean “soundness or health of mind” by the end of the 1500s:

He that is not 21. yeeres olde, or is not of perfect minde and memorie, maie be assigned tutor: but it is to be vnderstoode that hee shall be tutor when he is of ful age, or when he doth returne to sanitie of minde.
— Henry Swinburne, A briefe treatise of testaments and last willes, 1591

The distinction between sanity meaning “soundness of mind” and healthy, meaning “soundness of body” was made during the 16th century. It’s intriguing that even though the word health comes straight from Old English—it’s as old as the language itself—the term healthy entered the language centuries later, just as sanity was shifting its reference from the body to the mind. The language had made a distinction that became ever more clear as the two words settled into use.

Sane similarly referred to physical health at first (this corresponds to the modern French word sain/saine). As late as 1828, Noah Webster gave as his first definition:

This use is rarely encountered today; to us, sane mean “able to think normally” or “rational or sensible.”

Last to enter the language were sanitary and sanitation, which actually derived from the French word sanitaire and entered English in the mid-1800s, during the period when a causal relationship between clean surgical conditions and lower infection rates was being discovered. This is the moment that also gave us sanitize, defined as “to make sanitary (as by cleaning or sterilizing).” By the time these three words were introduced, enough time had passed that there was no direct connection with physical health (sanitary was never a synonym of healthy as sane had been), because of the evolution of the related terms.

The Origin of 'Sterilize'

Sterilize was first used in the 1600s as the opposite of fertilize: it referred to land that could not be used to grow crops. It was later applied to the incapacity to produce offspring before coming to mean “to clean by destroying germs or bacteria” shortly after sanitize was introduced. An old word gained a new meaning.

The Origin of 'Disinfect'

The idea of protecting from infection leads us to an older word: disinfect. Even though pathogens like bacteria and viruses were not scientifically understood when these words were coined, infection has been in use since the 1300s, and disinfect entered the language in the late 1500s. As medical practices became more precise, so did the use of these terms, though it can sometimes be hard to know what the exact differences are. Our definition for sanitize uses “clean” and our definition for disinfect uses "cleanse," words which, as we know, show different patterns of linguistic (if not scientific) usage.

A Formal Guideline for Cleaning, Sanitizing, and Disinfecting

Though the definitions may not give medical precision, we can get more information from government recommendations. These Environmental Protection Agency guidelines make a clear distinction between “cleaning” and “sanitizing”:

Cleaning is done with water, a cleaning product, and scrubbing. Cleaning does not kill bacteria, viruses, or fungi, which are generally referred to as “germs.” Cleaning products are used to remove germs, dirt, and other organic material by washing them down the drain. Sanitizing and disinfecting products are chemicals that work by killing germs. These chemicals are also called antimicrobial pesticides...Disinfectants kill more germs than sanitizers. In most cases, a cleaning product is used first. Then the surface is either sanitized or disinfected when it is necessary.

Sanitizing and disinfecting are different from simple cleaning or washing because they kill germs by chemical means, and, further, “Disinfectants kill more germs than sanitizers.” Guidelines from the CDC use wash to refer to cleaning with soap and water, and sanitize means using bleach.