On a word with many meanings

The use civil in civil war is not related to the definition "quiet or peaceable behavior." Instead it refers to an older meaning "of or relating to citizens," and thus civil war is between citizens of the same country. 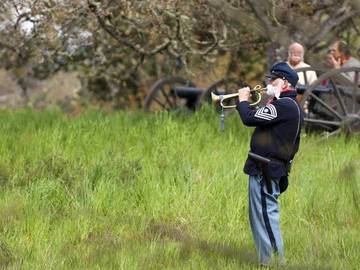 The term entered the lexicon in the early 16th century.

Among the many meanings of the word civil are “quiet and peaceable in behavior,” “civilized,” and “mannerly.” The semantic nonbelligerence of these senses has prompted more than one person to pause in whatever they were doing and wonder “what’s so civil about civil war?”

The Meaning and History of 'Civil'

While civil may indeed have all the peaceful meanings above, the earliest sense of the word in English is simply “of or relating to citizens.” This early meaning of civil mirrors that of its Latin predecessor, civilis (which came from civis, meaning “citizen”). It is this sense of civil, rather than the “mannerly” one, which gives us civil war, with its meaning of “a war between opposing groups of citizens of the same country.”

Civil began being used in the 14th century, and civil war entered the lexicon early in the 16th.

Further, pride, of thee, is to be abhorred no lesse,
Beynge of stryfe, and debate, the mother, and mistresse,
By this, the lawes, ar neglected, and the common welth spylled,
And innumerable people, this vayne pryde, hath kylled,
With this pestilence, the famouse Rome being once poysoned,
By cyuill warre, and oppression, was vtterly destroyed.
— Valentine Leigh, The pleasaunt playne and pythye pathewaye, 1522

Other Uses of 'Civil'

War is not the only seemingly contradictory word which may be joined with civil; disobedience is often found directly following it as well. We define civil disobedience as “refusal to obey governmental demands or commands especially as a nonviolent and usually collective means of forcing concessions from the government.” This sense dates from the latter half of the 19th century, but the use of civil disobedience to simply mean “rebellion” is quite a bit older, in use since the beginning of the 17th century.

…there is greate appearance of euill, and of ciuill disobedience in refusing thereof, considering that the taking of the Oath is commanded by the iust law of our lawfull Prince….
— Thomas Preston, A theologicall disputation, 1613

In many of its uses with other words civil is serving to give some legal meaning. A civil union is a legally recognized union (especially between two people of the same sex) that extends to them the rights afforded by marriage, and civil law is law that applies to private rights, as opposed to criminal matters.

Civil has many other extended meanings, including (among others) “showing goodwill, humaneness, or clemency,” “virtuous by nature but not regenerate,” and “favorable (said of weather).” So in answer to the question of what’s so civil about civil war the obvious, and unsatisfying, answer is ‘everything, and nothing at all.’