An attempt to provide solid ground

Within the construction trade there is a distinct difference between cement and concrete (which is made of cement plus other materials and water). However, concrete is a relatively newer phrase and before its use cement was used to refer to both forms of building material. Either is appropriate for everyday use.

The English language is rich in synonyms, and contains many pairs of words which are used interchangeably by a good portion of the population. On certain occasions this substitution of one word for another will bother a smaller (but still significant) portion of the population, who will shake their collective fists, gnash their collective teeth, and hoot “X does not mean Y!” The truly irate may write a letter to the editor (if the substitution has been observed in some newspaper) or craft a trenchant and biting tweet (if the complainer prefers to howl into the void). The words that have been used interchangeably tend to continue apace, blithely unaware that they are causing mental anguish to anyone. This is the case even when the confusion of one for another is the subject of advertising campaigns, as in the case of concrete and cement.

”Cement” is not an interchangeable term for concrete, the American Society of Concrete Constructors points out. Millions of advertising dollars have been spent to make this distinction clear to the public; yet, the greater part of the time concrete is still referred to as “cement.”
— The Chicago Tribune, 29 Jul. 1967 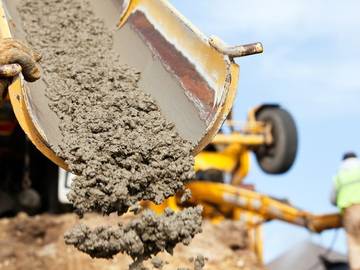 This distinction is not a new one; we have citations from over a century ago in which writers take care to observe (or admonish) that concrete and cement are not synonymous (the reasoning being that cement is one of the parts of concrete).

But cement is not concrete, so another trial was made, by forming blocks of the latter material 14 inches long, 4 inches wide, and 3 inches thick….
— The American Architect and Building News (Boston, MA), 7 Jun. 1884

Cement is a vital constituent of concrete, but concrete is not cement, Whyfor, then, do we hear “cement blocks,” “cement sidewalks,” cement buildings?” We usually mean what we say, or at least try to. Let us, then, say what we mean.
— A Subscriber, Concrete Engineering, 1 Jun. 1909

If people have been distinguishing between these words for well over a hundred years, millions of dollars in advertising money has been spent, innumerable angry letters and tweets composed, why is it that we still define cement as “concrete”? Is is from ignorance? Spite? Is it from anger that none of the millions of dollars of advertising money made its way into our pockets? No, we define cement as synonymous with concrete due to the fact that this is the way that many people have been using the word for more than 600 years.

The Origins of 'Cement'

Cement is far older than concrete, and as far back as the 14th century had a meaning that today would make many people say “you mean concrete, not cement.” For hundreds and hundreds of years used cement to refer to walls, floors, foundations, and the like, without anyone getting hot under the collar.

Alas my father, am I borne vnder so vnhappie a constellation, for to be a martyresse and prisoner, not in the end of my yeares, but in my young time? not in a prison of stone, or of cement, but in a tower of Copper and Latton, in such wise as I should dwell therein, perpetually?
— Raoul Lefèvre, The auncient historie, 1597

The Origins of 'Concrete'

Concrete, on the other hand, is a relative newcomer (at least in the sense that is under dispute). Although concrete has been in use as a noun since the 17th century, it initially only meant “a mass formed by concretion or coalescence of separate particles of matter in one body.” The sense beloved by the building trades (“a hard strong building material made by mixing a cementing material (such as Portland cement) and a mineral aggregate (such as sand and gravel) with sufficient water to cause the cement to set and bind the entire mass”) does not appear in our records until the 1830s; the first such appearances of the word tend to use language indicating that this sense was new at the time.

The foundation is laid in a composition, forming a hard mass, called concrete.
— The Saturday Magazine (London, Eng.), 2 Feb. 1833

Of late years, a new method, or, at least, a remodeling of an old one, has been adopted, to which I am now about to call your attention, having had peculiar opportunities of observing its properties and effects. I allude to the composition called concrete.
— Architectural Magazine (London, Eng.), Feb. 1836

You may, if you wish, continue to distinguish between cement and concrete, and we understand that there are many circumstances in which it is useful to do so. But this distinction is, in the relative scheme of things, a recent one, and those people who use cement to refer to “a hard strong building material” are not violating one of the basic principles of our language.