You can learn all about them

Both cannot and can not are perfectly fine, but cannot is far more common and is therefore recommended, especially in any kind of formal writing. Can't has the same meaning, but as with contractions in general, it is somewhat informal. In some cases, the not following can is in fact part of another phrase, such as “not only"; in such instances can not is the appropriate choice. 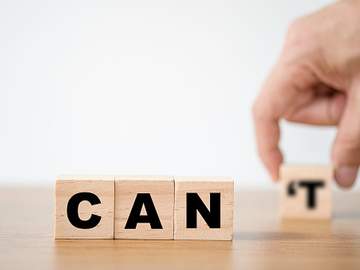 This dictionary defines cannot as “can not.” The word and the phrase mean exactly the same thing: both are the negation of the very common and useful verb can. The only difference between them is that the closed form, cannot, is much more common.

I smell pie but I cannot see any pie.

I smell pie but I can not see any pie.

Cannot has been in use since the 15th century. We don’t know why English speakers thought it’d be a good idea to zip the two words together to form one; they didn’t seem to see much use in doing the same to do not or is not or have not.

English speakers did see fit to make contractions out of the whole lot of them, though: in addition to cannot we have can’t as well. And we also have don’t, isn’t, haven’t, couldn’t, etc. These all mean precisely the same thing as their extended forms. The only difference between don’t and do not, isn’t and is not, etc., is that the contractions tend not to be used in formal writing. (This is true of can’t as well.)

When 'Can Not' Is Preferred

There is one set of circumstances in which can not is preferred over cannot—when the not is functioning as part of a different phrase:

Now I can not only smell the pie, but I can also see it.

If you’re unsure about the phrasal status of the not, try the sentence with can’t instead and see if it works:

*Now I can’t only smell the pie, but I can also see it.

(The * is a signal that this sentence is not one that passes muster grammatically.)

Cant (without the apostrophe) is another word—or several words, actually. In its most common use as a noun it refers to the language used by a particular subset of people, as in “the cant of thieves.” None of its homographs have anything to do with not being able or permitted to do something.