9 of the Sweetest Words for Candy

How to tell your bonbons from your truffles
Last Updated: 17 May 2022 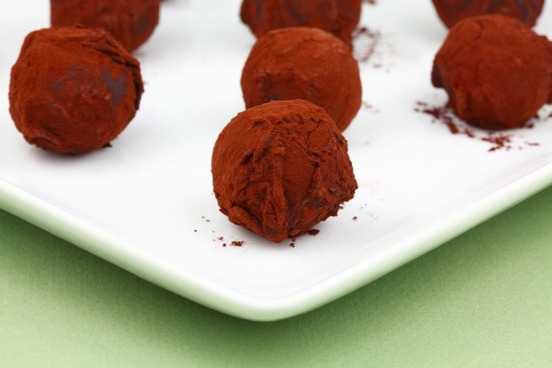 The chocolate truffle owes its name to the underground fungus celebrated as a delicacy in French haute cuisine. Truffle comes from the Latin word tuber, meaning “swelling” or “truffle.” In English, tuber means “a short, thick, round stem that is a part of certain plants (such as the potato), that grows underground, and that can produce a new plant.” The chocolate version, defined as “a candy made of chocolate, butter, sugar, and sometimes liqueur shaped into balls and often coated with cocoa,” got its name from its resemblance to its namesake.

Truffle comes directly from the French word truffe, which, in addition to the fungus and the candy meanings, can be used in informal language to refer to a large nose or the tip of the muzzle of a dog or cat. It’s also a slang synonym for “idiot” or “imbecile.”

Though there’s not a formal distinction, chocolate truffles are typically soft, whereas a soft chocolate center covered in a hard chocolate shell is typically called a bonbon. 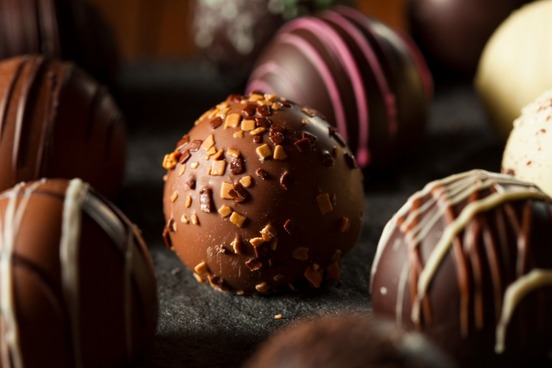 Bonbon is French for “good-good,” which is a fair description of something yummy. It’s an example of what linguists call reduplication, when part of a word is repeated. (Another example is the root of yummy: yum-yum.) Bonbon can mean a few different kinds of candy, but often means one with a hard chocolate cover and a soft center. The hard outer coating of chocolate is called the couverture, which comes from the word meaning “cover” in French. Bonbon is also used for hard candies in general.

A rare extended sense of bonbon is “something that is pleasing in a light or frivolous way.” 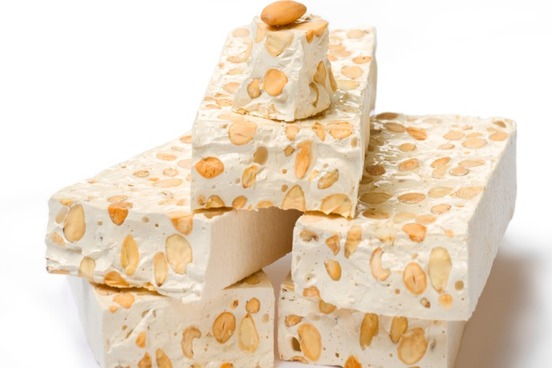 Nougat (pronounced NOO-get or, especially in British English, modeled on the French pronunciation, NOO-gah) is “a confection of nuts or fruit pieces in a sugar paste.” Most commonly made with almonds, it’s also frequently made with walnuts or hazelnuts. Honey or sugar and egg whites are cooked at a low temperature, then stiffened and combined with sugar and corn syrup. Some nougat is soft and chewy and some is brittle.

The word nougat comes directly from French, and goes back through the Occitan language to the Latin word for nut. 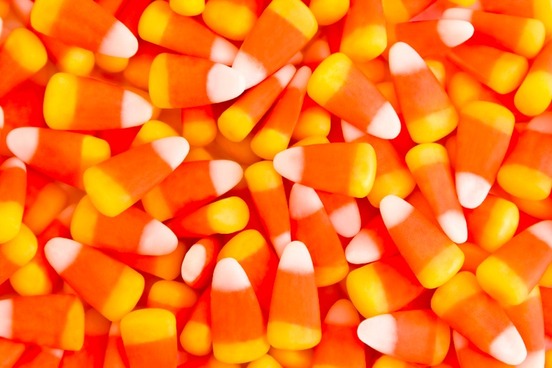 You may not know the word Mellowcreme, but you know what it tastes like: candy corn. Made by mixing sugar, corn syrup, edible wax, and water, it’s the moldable substance of the familiar Halloween candy. Add some honey, and it's what candy pumpkins are made of.

Mellowcreme is a trademark held by the company that owns Brach’s Confections, but other spellings include mellocreme and mellowcream. 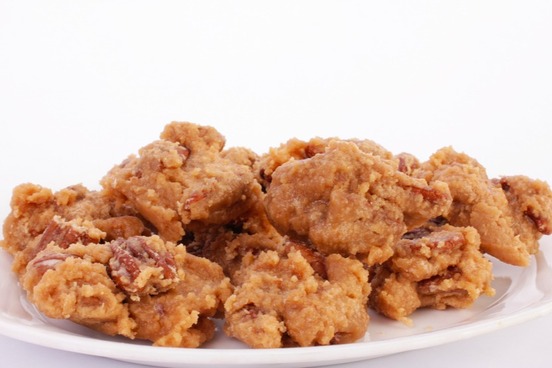 Praline (pronounced PRAH-leen or PRAY-leen) names several confections. The original pralines, made in France in the 1600s, were almonds cooked in boiling sugar until brown and crisp. A soft paste made by grinding the sugared nut (and sometimes mixed with chocolate or other ingredients), came to be used as a filling for chocolates, and, in Belgium, a praline is a chocolate bonbon, a case of hard chocolate with a soft center.

When the French arrived in Louisiana, they used the local sugar cane and pecans and adjusted the recipe by adding salt and light cream to make their distinctive, fudgy candy.

The word praline comes from the name of the French Field Marshal Comte du Plessis-Praslin, because his cook made the first sugar-coated almonds. In French, it’s also a verb: praliner. 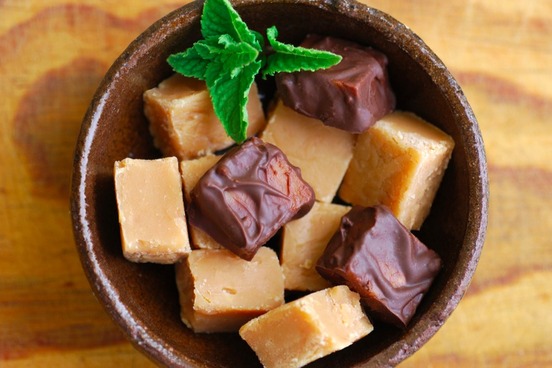 Fudge is a relatively new name for a sweet—evidence of the word used to mean “soft creamy candy made typically of sugar, milk, butter, and flavoring” only goes back to the late 1800s. Fudge as a verb is much older, and its use meaning “to fake” or “to falsify” (as in “they fudged the figures”) goes back to the 1600s. There actually was a British naval officer named Captain Fudge, who, according to old sailors’ lore, was known as a liar, but it’s doubtful that his name became the common English word; instead, it seems to have come from fadge, an archaic word used to mean “to fit together in order to repair” or “to improvise a solution.”

Fudge then became an interjection meaning “foolish nonsense” in the 1700s before sweetening to its current meaning. 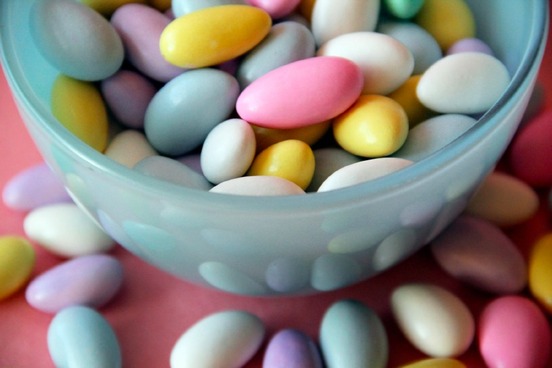 A dragée (pronounced drah-zhay) is an almond covered with a layer of hardened sugar. The French love their sweet delicacies: there’s evidence of the use of this word starting in the Middle Ages. Its use in English is rare, and the word was borrowed in the 1800s.

A similar candy, the Jordan almond, is defined as “a large Spanish almond especially when salted with sugar of various colors,” and dates to the 1600s in English. The Jordan in Jordan almond is likely an alteration of the word for “garden” in French (jardin) or Spanish (jardín). 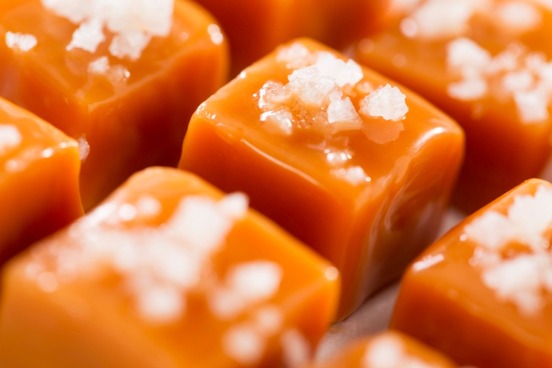 Caramel is the name for a light brown candy made from butter, sugar, and milk or cream, but it is also used to refer to sugar that is cooked until it is burnt that is used as a flavor or color, or, most simply, as a light brown color. Like so many of our dessert words, it came to English from French. The French word came through Spanish from the Portuguese word caramelo, which meant “icicle” and derived from the Latin word for “small reed” or “tube.” 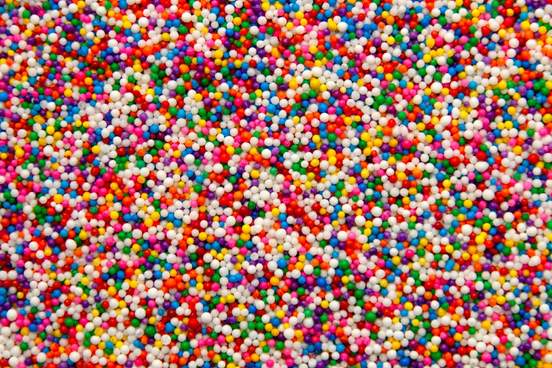 In English, 'nonpareil' means "having no equal" or “a small flat disc of chocolate covered with sugar sprinkles." In French, it doesn't mean much of anything anymore.
READ MORE >