Can You Feel 'Nauseous'?

And what does 'Satan's Tennis-Ball' have to do with it?

Oftentimes when people come to the dictionary in search of an answer there is both a long and a short way of answering the question. In many such cases we'll give the short answer first, and then the longer answer (which has much explanatory material, and is designed to mollify those who received an answer they didn't want) following. Here's an example:

A. You may use nauseous to mean "nauseated." 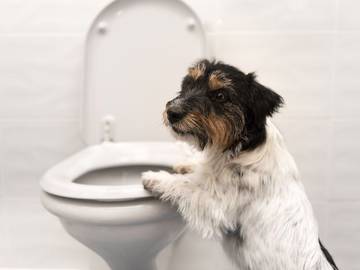 Now we may move on to the mollification portion of this article. Many people have a strong belief that the proper use of nauseous is the one which may be defined as "causing nausea or disgust," and that if you wish to say that a person feels as though their stomach will disgorge its contents then nauseated is the word to use ('I feel nauseated, rather than 'I feel nauseous'). We do not disagree that this is a fine and specific manner in which to use nauseous, and if this is the way in which you learned how to use the word you may continue to do so. However, we must point out that nauseous, like many other words in our language, is remarkable in its elasticity and range of meaning, and its applicability in the context of "I'm gonna hurl" is neither incorrect nor relegated to the unlearned.

The first recorded mention we have of nauseous comes, helpfully enough, from a dictionary. The 1609 edition of Robert Cawdrey's A Table Alphabeticall includes it as a headword, with a definition that differs somewhat from the one that is often proscribed today (Cawdrey defines it as "loathing or disposed to vomit"). The "causing nausea" sense appears first in our records in a 1618 work by John Vicars.

Which, though some Wretches Atheisticall,
Some Nauseous Neuter, Satan's Tennis-Ball,
Some execrable Sadduces (I say)
Which doe the Resurrection denay,
Though some vile Sectists Pythagoricall,
Or Infidells most Diabolicall.
— John Vicars, A Prospective Glasse to Looke into Heavan, 1618

Putting aside for now the fact that any book from the 17th century which contains the phrase "Satan's tennis-ball" deserves more attention, the sense in which Vicars used nauseous (to mean "nauseating") was the dominant one for the next several hundred years, and the one defined by Cawdrey is found but occasionally. In the middle of the 19th century the sense of nauseous meaning "nauseated" begins to appear.

At the end of another hour it was evident that the lobelia had begun to make her feel nauseous, and again she was tried, but would not move any more than before.
— National Aegis (Worcester, MA), 4 Mar. 1857

In about half an hour Mr. Schemernon's body was swollen terribly; his leg measuring about two feet around. He also felt nauseous about the stomach, and commences to vomit violently.
— Newbern Journal of Commerce (New Bern, NC), 31 Jul. 1867

In the 20th century the "nauseated" sense of nauseous became increasingly common and, as is so often the case when a word takes on new meanings, objections to this new use became common as well. One of the common reasons for why we should not use nauseous in both the "nauseated" and the "nauseating" contexts is that to do so would lead to ambiguity.

But the disparate uses of nauseous are hardly ambiguous. When employed to mean "nauseated" nauseous typically is used as a predicate adjective, and following a copulative verb such as be, feel, or become ('the boat ride on the water made me feel nauseous'). The "nauseating" sense of nauseous, on the other hand, tends to be found as an attributive adjective, coming before the noun it modifies ('the nauseous trip made me wish I'd not gotten on the boat').

The "nauseated" sense of nauseous is now in widespread use, found in well-edited newspapers, books by highly-regarded authors, medical journals, and your children's social media feeds. You do not have to use the word in this way, but you also do not have to argue about it. We could all spend our time on something more useful, such as finding a new use for Satan's tennis-ball.