Strong-arming its way into a new sense

In typical established use extort is about a particular kind of nasty behavior in which someone uses force or threats to get something from someone else. It's a verb, and specifically a verb of the transitive kind, which means that it's followed by a noun, pronoun, or noun phrase that completes the sentence's meaning. One extorts something; one doesn't simply extort.* Most often it's money that gets extorted, but confessions and the like can be extorted too. 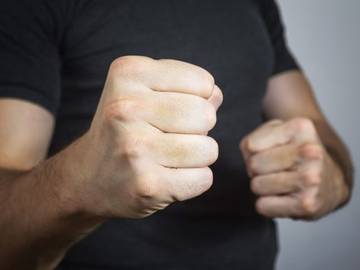 Keep reading if you know what's good for you.

What has not traditionally been extorted is people. But we're increasingly seeing the word extort being used in a new way, with the ones who are being extorted from as the objects of the verb.

Here's an example of the established use:

Convinced that Harry the Dog had cheated to win the baking contest, Mabel the Cat determined to extort the prize money from him.

And here's an example of the newer use:

Mabel the Cat determined to extort Harry the Dog for the prize money.

It's a subtle shift, but it's the kind of shift in meaning that, if and when it becomes fully established, warrants a new sense in this dictionary.

Currently, the earliest evidence of the use we've seen is from the 1988 medical thriller Mortal Fear, by Robin Cook:

Dawen folded his hands on the table and looked directly at Jason. "We were afraid you were going to extort us with this material—make us pay to get it back," he said, touching the cover of the lab book.

It's really in this century, however, that the use has started to become somewhat common:

Not excited? How am I supposed to not get excited, listening to you try to extort a working man?
— Collateral (movie script), 2004

While film purists will scoff at how it mucks with the story line by adding you as a Corleone foot soldier, gamers will revel in the open-world environment where you snuff out rivals and extort the local barber.
— Marc Bernardin, Entertainment Weekly, 24 Mar. 2006

It's now even appearing in some rather formal settings:

If the Court overturns Hall, governments could bully, extort and defraud residents of other states with legal impunity and no political accountability.
— editorial board, The Wall Street Journal, 8 Jan. 2019

Extort is an old word with a Latin pedigree that includes the word torquēre, meaning "to twist"—also the source of torture. Extort has been used in English since the 15th century, and in all the intervening years its use has changed relatively little. It has developed softer edges, with persuasion, argument, and ingenuity joining physical force, abuse, and intimidation as qualifying methods of extorting, but the thing extorted has never been the person or entity wrested of a desirable. Except that's not exactly true: the Oxford English Dictionary reports an obsolete meaning of extort, defined as "to practice extortion on (a person)," and illustrated with three examples from between 1561 and 1616, including one from John Davies' 1612 A discovery of the true causes why Ireland was never entirely subdued and brought under obedience of the crown of England until the beginning of His Majesty's happy reign: "they did extort & oppresse the people."

Is the use we've been observing in recent sources a conscious resurrection of the older use? Nope. There's no evidence of that. What's more likely is that extort is simply being pushed in a new direction by the language's speakers, perhaps with help from bribe, which is a common contextual partner and which has the person or entity bribed as its object.

Whether this new use of extort becomes established enough to warrant a new definition in this dictionary remains to be seen. But current evidence suggests it's settling into the language quite nicely, thank you very much. And we see no force in play.