The English language does not care if you are happy or sad. It is oblivious to your shrill entreaties for an orderly and sensible vocabulary. As proof of this supreme indifference we need look no further than the words founder and flounder, for no language that cares about its speakers would ever allow this kind of semantic cruelty to exist. 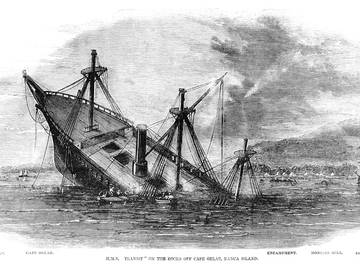 "What is so hard about founder and flounder?" some of you are asking, perhaps with a supercilious cast to your voice (we can hear you, by the way); "ships founder and people flounder ... easy peasy lemon squeezy." The English language scoffs at your feeble attempts to interject a rhyming Briticism into a discussion on usage.

Putting aside the fact that both of these words function as nouns (founder as “one who establishes” and flounder as “flatfish”), let’s look at how the verb senses have come to be often confused.

Founder is the older of these two, dating back to the 14th century, and has a useful etymology: it can be traced to the Vulgar Latin fundus, meaning “bottom.” The reason that this is useful is that one of the main contemporary senses of founder is “to send (a ship) to the bottom.”

No one is entirely certain where flounder comes from, although there is speculation that the word, which began to be used at the end of the 16th century, came about as an alteration of founder. The earliest senses of these words were somewhat related; founder was first used with the meaning of “to become disabled,” and flounder was first used to mean “stumble.”

The problem is that these words look and sound almost identical, and each one has meanings that would work quite well in an essay titled “Things That Did Not Go the Way That I Had Hoped.” The difference that is observed by most usage guides is that founder carries a stronger sense of completed failure (its synonyms are sink, collapse, and fail) whereas flounder has more of a meaning of “struggle” or “act clumsily.” One way to look at it is that you can flounder for a while and then eventually founder, but you cannot founder for a while and then flounder.

But can a ship flounder? There are certainly many instances in which writers have used this word to describe the actions of a seaborne vessel where they would have been better off using founder:

When the Titanic struck the ice and floundered and sank, the band played “Nearer, My God, to Thee."
—Bulletin of the National Federation of Remedial Loan Associations, 1918

However, there are also numerous cases where writers have used flounder to describe a ship that is in fact struggling, or moving ineffectually, and in cases such as this it would not make sense to use founder:

The storm had broken, and the fragmentary clouds were flying like lightning over the sky, while the sea, as far as the eye could reach, was one vast expanse of heaving, tumbling mountains—their basis a bright pea-green, and their ridges white as snow. Over and around these our good ship floundered like a mere toy.
—Naval Journal, 1848

He forgets that this big ship floundered around for a good many days without sighting anything but water.
—George Barr McCutcheon, West Wind Drift, 1920

It should be noted that most of these examples come from a hundred or more years ago, a time when people had not yet begun to worry about whether they were misusing these two words. So yes, a ship may indeed flounder, but this may well be one of those cases where you would do well to simply find another word— (galumph, careen, bumble)—rather than have to explain why you chose a word that many people will reflexively assume was chosen in error.

In case this still does not make sense to you, we will offer up yet another example of how these two words might be used in different contexts: If you are gamely trying to work out which one of these two words you will use in your “Things That Did Not Go the Way That I Had Hoped” essay, but still cannot figure it out, then you are floundering; if you have given up in disgust and have decided to consult a thesaurus for some alternatives, then you may be said to have foundered.