Let's Organize the History of 'Cabinet'

A word's meanings shouldn't just sit on the shelf

If you went in search of the English word with the three most disparate meanings, you would be hard-pressed to do better than the one which can be “a body of advisers of a head of state,” “a cupboard where your grandmother keeps canning supplies,” and “a milkshake.” What amazing word contains such multitudes? Cabinet. While this semantic breadth may seem a bit odd, it all makes sense (as long as you accept a fairly broad meaning of the words it, and makes, and sense). 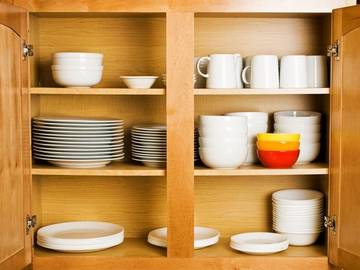 No one is entirely sure about that "milkshake" thing.

Cabinet came into English use around the middle of the 16th century, and our earliest records of the word show a range of meanings. This does not mean that the word suddenly sprang to life in a variety of different forms; more likely is that the earliest written uses of cabinet are lost, or that spoken use of the word existed for sometime before anyone got around to writing it down. The initial meaning is probably the one you would usually think of when you hear cabinet: “a box for storing chiefly small articles.” Many of the citations from the middle of the 16th century use the word in a decidedly figurative manner, but still seem to indicate that an item having to do with compartments or storage was among the first meanings.

And when shee hathe in thys sorte enriched the Cabinet of her harte with such treasures, let her learne by harte the Prophetes, the bookes of Moses, of the kings, the Paralipomenon, Esoras, and also Hester, & last of al the song of songes….
— Pierre Viret, The Firste Parte of the Christian Instruction, 1565

Towards the end of the 16th century the word took on a number of additional senses, including “a small room providing seclusion,” and “the private room serving as council chamber of the chief councillors or ministers of a sovereign.” Members of the royal family, or their council, might have a cabinet.

…he stayed theire three or fowre Howers afore he had Audience; at leingth the King hard him in his Cabinet, what passed I kanne by no Waye gett owte, but uppon his Speeche theire was a new Resolution that was not taken before….
— Jo. de Vignes, Letter to Francis Walsingham, 29 May 1594

As the 16th century bled into the 17th we see glimmers of the word's changing from referring to the specific room where councillors met, to describing the body of these people as a whole. The advisors are first called a cabinet council, and later simply a cabinet.

These he imployes, about references, and businesses of private consequence, whilst misteries of state were intimated only to such whom he selected, to be of his more private, Cabinet Councell; with whom now he adviseth, how to encrease his forraine correspondence, and advance his estate.
— John Trussel, A Continuation of the Collection of the History of England, 1636

…the Lord Savill, who is now of your cabinet, though not of your counsell….
— Anon., Observations upon the Earle of New-Castles Declaration, 1643

So that covers two of the disparate meanings of cabinet listed above, leaving the question of ‘what do milkshakes have to do with all this?’ The use of cabinet in this fashion appears to be largely peculiar to the state of Rhode Island, and no one is entirely certain why they refer to it thusly (there is speculation that the name came in the mid-20th century from a druggist who had a cabinet in which he kept the ice cream used to make the shakes).

And recently, in Rhode Island, I drank, for the first time in years what is known up there as a cabinet, and everywhere else as a milkshake.
— Mary Cantwell, The New York Times, 3 Sept. 1980

So if there was a group of Rhode Island political advisors who all were drinking milkshakes, and then inexplicably decided to put them in a cupboard could you say “the cabinet’s cabinets are in the cabinet”? You could, but you probably won't have to.