The Abundant History of 'Bumper Crop'

On the many meanings of 'bumper'

One of the issues with a language that is rich in polysemous vocabulary is that from time to time one will be compelled to pause in speech or writing, scratch one’s head, and wonder ‘why do we use that word there?’ For instance, many of us are familiar with the use of bumper crop in the sense of “a very large crop,” yet few of us use bumper in a manner that would seem to make sense in this setting. 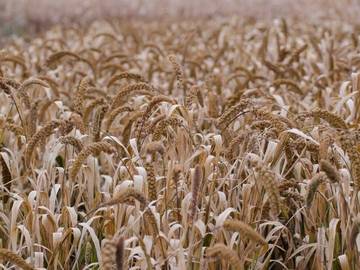 'Bumper' may serve as a synonym for 'banner' (“distinguished from all others especially in excellence”).

Bumper has a large number of meanings in English (many of them regional), such as “a bowled ball in cricket that bumps,” “a cigarette butt,” “a woman's hat with a narrow brim fashioned like a tube or padded roll,” or “a bar or bars attached to either end of an automobile or other powered transportation vehicle to prevent damage to the body.” Among the earliest of the word’s many senses, dating from the middle of the 17th century, is “a brimming cup or glass.”

Comes Boyes fill up a Bumper,
we’l make the Nation Roare,
She’s grown sick of a Rumper
that sticks on the old Score.
— Anon., The courtiers health, 1648

This sense of bumper soon after took on the related sense of “something unusually large,” and by the early 19th century bumper was also functioning as an adjective, meaning “unusually large.” Crop is among the words most commonly modified by this adjective, although the word crop has not also been applied to things grown on a farm.

Grouse shooting commenced on Friday, and from all we have been able to learn from the moors in our own vicinity, the birds have seldom been known to be so strong and numerous; they are, in fact, a bumper crop, and the sport has, in consequence, been excellent, and such as fully compensated the sportsmen for the fatigue which they were subjected to by the great heat of the weather.
— The Scotsman, (Edinburgh, Sc.), 17 Aug. 1836

The potatoes will yet dry and ripen if fine weather continue, and turnips will come away, in that case, and be a bumper crop.
— Blackburn Standard (Blackburn, Eng.), 2 Oct. 1839

The cultivating classes are in high spirits at the prospect of a bumper crop. Fresh potatoes from the Hills are being sold in the bazar at very reasonable rates.
— The Bombay Times (Bombay, Ind.), 13 Oct. 1849

Other Types of Bumpers

Crops are not the only things that may be bumpers; the word may apply (as an adjective or a noun) to the audience at theatrical houses (or the audience or attendees at other shows), or to a wide variety of results.

The second concert of this original band of minstrels at Metropolitan Hall, last evening, was a bumper in every respect. The house was a bumper of a house and the performances were all received with bumpers of applause.
— Chicago Tribune, 20 Mar. 1861

Organisers have hailed the Strathalbyn Show, held on Monday, a huge success, with bumper crowds and great depth of livestock entries despite the scramble by local farmers for feed for their stock in the dry conditions.
— Bryan Littlely, The Times (Victor Harbor, Aus.), 4 Oct. 2018

The New Year’s resolution crop will be among the bumper failures.
— Kentucky Advocate, 4 Jan. 1916

In addition to “large,” bumper may also serve as a synonym for the adjective banner (in the sense “distinguished from all others especially in excellence”). It is up to you, given the wide variety of meanings of bumper, which of the possible adjectival senses it should assign to itself.

GAME ON
Farm Idioms Quiz: Not your children's farm quiz.