On 'Brooch' and 'Broach'

One you wear, and, sorry, the other you can wear too

A brooch is a piece of jewelry held on with a pin or clasp, while broach is most often a verb meaning to introduce a new subject into a discussion. However, 'broach' has historically been used as a noun as well, also referring to the jewelry. Both words have the same etymology, with the piercing or opening action of the jewelry being used figuratively to tie 'broach' to 'opening up' a new subject. 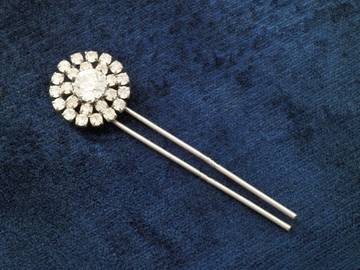 Let us introduce the subject of lapel jewelry.

Brooch and broach: they differ in spelling enough to look distinct, but their primary pronunciations are identical—both rhyme with poach.

Often when we encounter the word brooch it's about someone's grandmother's jewelry:

Kate arrived at the centre wearing a blue and white polka dot dress …, complemented by a brooch which is understood to have belonged to her grandmother.
— The Daily Mail (UK), 14 May 2019

A brooch is a piece of jewelry worn on clothing, held on with a pin or clasp. The word's primary pronunciation is, as we said above, one that rhymes with poach, but it can also be pronounced to rhyme with pooch; the former pronunciation is both older and dominant, but the word's spelling makes the latter pronunciation almost inevitable, given the pronunciation of "oa" in words like boat and coat, not to mention in coach and roach.

Broach functions as both a noun and a verb, but verb use is predominant. It's most often used to talk about introducing a particular subject or issue for discussion:

It's OK to ask about remote work arrangements in a job interview, but the key is to do so unobtrusively. A good way to broach the topic is to ask the question on a general basis, along the lines of: "Do most of your employees work full-time from the office, or is there a lot of telecommuting?"
— Maurie Backman, The Motley Fool (fool.com) 1 Apr. 2019

We can summarize all this easily then: use brooch for the jewelry, and broach as a verb for introducing topics. Pronounce them the same (or not). But of course there's something more complicated here. A couple things, really.

Origins of 'Brooch' and 'Broach'

First of all, broach is somewhat frequently used as a noun to mean brooch. Second of all, etymologically, the words are identical.

Since the 13th century, both brooch and broach have been used to refer to the jewelry, so castigating those who write about wearing broaches is quite unfair. The Middle English ancestor of both words is broche, which refers to either the jewelry still familiar today, or to a pointed instrument. The brooch spelling got tied specifically and only to the jewelry, but broach went on to have other related noun meanings as well. It can refer to various pointed or tapered implements or parts, such as a spit for roasting meat or a tool for tapping casks, or a cutting tool used to shape an outside surface or hole.

Broach took a couple centuries to develop verb uses. Its first verbal foray was related to its tool-specific noun uses: "to pierce (something, such as a cask) in order to draw the contents." Other piercing, opening, and shaping senses followed, with figurative use settling in after a while, first with a "to make known for the first time" meaning, and then the familiar "to open up (a subject) for discussion." Broach is also used to mean "to break the surface from below," as in "the whale broached," and functions too in nautical contexts to mean "to veer or yaw dangerously so as to lie broadside to the waves," as in "our ship broached to."

You can, of course, decide to keep things distinct and use brooch for the jewelry and broach for introducing topics; no one will complain if you do. But likewise you shouldn't complain if others use broach for both. History and current use both back the practice up.