We can bring it if you can take it.

Bring and take are sometimes used in the same contexts, which makes people who feel strongly about such things very uncomfortable. Just what is the deal with bring and take? 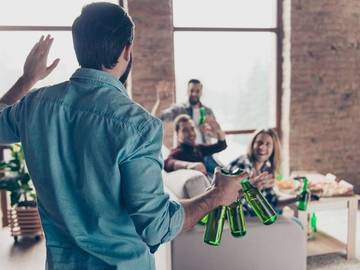 And do you 'bring' or 'take' some brewskis over to your bro's place?

Sometimes where we apply one or the other is clear to any native speaker:

Bring me that dictionary, please.

We wouldn't say "take me that dictionary" because the word for carrying something toward the speaker (or other place from which the action is being regarded) is bring.

Take that other, inferior dictionary away, please.

We wouldn't say "bring that other dictionary away" because the word for carrying something along to another place is take.

But what about an excellent dictionary destined to be carried along to another place by the speaker?

I'm going to take this dictionary to my favorite pub—they should have one at the bar.

I'm going to bring this dictionary to my favorite pub—they should have one at the bar.

Either of those is likely to come from the mouth of a native speaker interested in dictionary access at pubs. But is one correct?

But while it's true that we use bring for motion towards ("bring it here") and take for motion away ("take it away"), native speakers of English also use bring and take in cases irrespective of motion.

Sometimes, it's unclear what the direction of the motion is. If you're to be the dictionary-bearer in someone's stead, you will deliver the dictionary they're giving you to your favorite pub, which means that the dictionary is moving toward you initially, but then you and the dictionary are moving away from wherever you are as you proceed to the pub. They can reasonably ask you to bring or take the dictionary with you.

The goings-on in the speaker's mind also come into play. If you're looking forward to your next pub visit and intend to find a place there for a pristine copy of Merriam-Webster's Collegiate Dictionary, you may murmur to yourself, "Don't forget to bring the dictionary." In your mind you're already on the way to the pub, and imagining yourself seated at the bar (recognizing once again how improved the situation would be if there were a copy of a quality dictionary there for company). You could likewise murmur, "Don't forget to take the dictionary," the journey to the pub not yet being undertaken in your mind.

While those who feel strongly about such things would denounce the first murmuration as a linguistic travesty, its use of bring dates back at least as far as the Bard himself. In "Much Ado About Nothing," the constable Dogberry has gone before a magistrate with news of the capture of a couple of suspicious characters whom he would like the magistrate to examine; the magistrate is in haste to be elsewhere and tells Dogberry to examine the men himself. As the magistrate leaves, Dogberry says to his partner Verges:

Go, good partner, go get you to Francis Seacoal; bid him bring his pen and inkhorn to the jail.

And "The Comedy of Errors" includes an exchange in which two men each think that the other has a particular gold chain:

ANTIPHOLUS (OF EPHESUS). And with you take the chain, and bid my wife / Disburse the sum on the receipt thereof. / Perchance I will be there as soon as you.

ANGELO. Then you will bring the chain to her yourself?

Like your happier version, looking forward to a dictionary at the pub, Dogberry and Angelo are thinking ahead.

As is so often the case, native speakers can trust their own ears when they are deciding between bring and take: if neither sounds wrong, either is fine.