The Teaches of Screeches 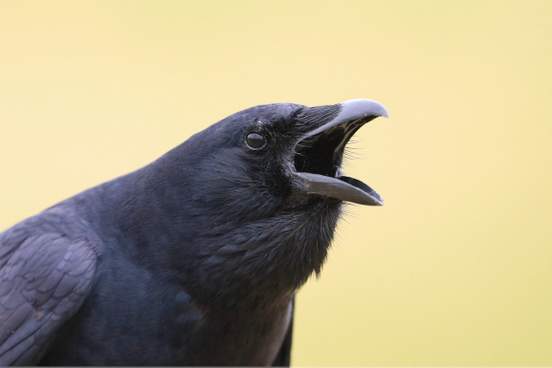 With the spring migration of hundreds of bird species underway throughout North America, you may hear an unfamiliar call, song, or other bird-related noise in the coming months, whether you live in the city or country. With thanks to the Cornell Lab of Ornithology's Macaulay Library for the audio and visuals, here’s a list of fifteen common and not-so-common words for avian utterances that might help you distinguish a veery from a vireo.

Like many words for bird calls—including several on this list—hoot is imitative in origin. An “imitative” or “onomatopoeic” word (e.g. buzz) tries to capture the sound it describes. So when you say it out loud, hoot sounds like the natural throat noise produced by some owls. Try it! As we’ll see further down, not all owls hoot, but barred owls and great horned owls do.

One sense of laugh is “to show emotion (such as mirth, joy, or scorn) with a chuckle or explosive vocal sound.” Since ascribing emotion to such birds as the common loon and laughing gull would be anthropomorphism, another sense in our dictionary—”to produce the sound or appearance of laughter”—is a better fit.

A screech is a “high shrill piercing cry.” One of the most famous bird screeches is that of the red-tailed hawk, which you might recognize from movies and television shows that dub it over the less strident call of the bald eagle to make that national symbol sound tougher. Another screecher is the barn owl, whose raggedy wail might raise the hair on the back of your neck.

Croaking’s not just for frogs! Yet another imitative word, croak is defined as a “hoarse harsh cry or sound,” which describes the calls of both the common raven and the American bittern.

The definition of caw is similar to croak—both are “harsh”—but caw gets the added descriptor “raucous.” This makes perfect sense for the gregarious birds most associated with cawing: crows. Compare the differences in the caws of two crow species, the American crow and the fish crow...

Not all bird sounds are vocalizations. The male ruffed grouse, for example, drums (throbs or sounds rhythmically) by rapidly rotating his wings back and forth (up to five times a second), producing a deep, low thumping you can almost feel as much as hear.

A chirp is the “characteristic short sharp sound especially of a small bird” and perhaps one of the quintessential bird sound words in English. American goldfinches emit a series of chirps that some say sounds like “potato chip,” while the red-eyed vireo perches high in the treetops where it can chirp for hours on a long summer day.

A trill can mean “the alternation of two musical tones a diatonic second apart” or “a sound resembling a musical trill.” The flute-like trill of the wood thrush is perhaps the most beautiful song of any North American bird. The descending trill of its relative the veery isn’t too shabby, either.

To warble is “to sing in a trilling manner or with many turns and variations.” An entire family (Parulidae) of North American birds is known as the New World Warblers for the quality of (many of) their songs and calls. The song of the Louisiana water thrush—a warbler, not a thrush!—is a mirthful warble heard often beside quick-moving streams in early spring.

Ruby-throated and black-chinned hummingbirds can produce a buzz, “a persistent vibratory sound,” with their wings. Other birds, like the black-throated green warbler and the northern parula, sing with a distinctly buzzy quality.

A whinny is “the neigh of a horse” (of course of course), but also any sound resembling a whinny. Despite its name, the eastern screech-owl doesn’t screech, it whinnies, as does the pileated woodpecker.

A whistle is “the shrill clear note of a bird or other animal,” and lots of birds whistle—from the soaring broad-winged hawk to the tiny, tree-climbing brown creeper.

Spoiler alert! The definition of coo, “to make the low soft cry of a dove or pigeon or a similar sound,” would seem to tell the whole story. But other birds coo as well; the greater sage-grouse for example, emits a series of cooing notes as part of a display that also includes swishing (of wings), booming (from its yellow air sacs), and whistling.

Peent is not entered in our dictionary, due to its rarity, but it’s a word often used by birders to describe the curt, nasal call made by both the American woodcock (low to the ground near the edges of fields and wetlands) and common nighthawk (high in the sky over cities, fields, and woodlands).

Before a tweet was “a post made on the Twitter online message service,” it was “a chirping note.” So, think again of a “short sharp sound” resembling the sound of the word itself. To our ears the lazuli bunting, a vibrantly hued songbird of western North America, absolutely tweets, as does the northern cardinal. If these and the other bird sounds in this gallery delighted you, tweet about it (both senses)! 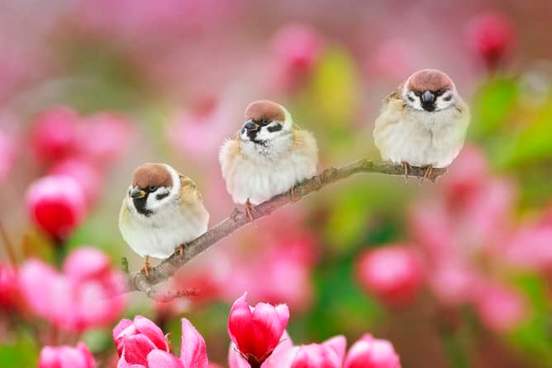 'Auspicious', 'musket', and 'volatile' all have origins related to birds.
SEE THE LIST >