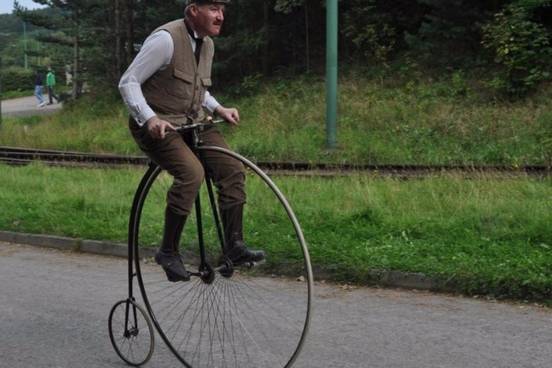 Definition: a bicycle with a large front wheel and a small rear wheel common from about 1870 to 1890

The bicycle with a very large front wheel and tiny rear wheel was invented in France in 1869. The large front wheel allowed for faster speeds, since the power from the pedals at the hub of the wheel was direct drive. A larger wheel meant a greater distance traveled for each pedal turn as well as a smoother ride over bumpy roads. This kind of bicycle was called a hi-wheel or an ordinary after the invention of the chain-driven safety bicycle with equal wheel size.

The term penny-farthing arose in Britain, where a farthing was a small coin worth ¼ of a penny. Put next to each other, the penny resembled the large front wheel and the farthing resembled the small rear wheel. They were dangerous and expensive but popular, and it was because of them that bicycling truly became a sport. 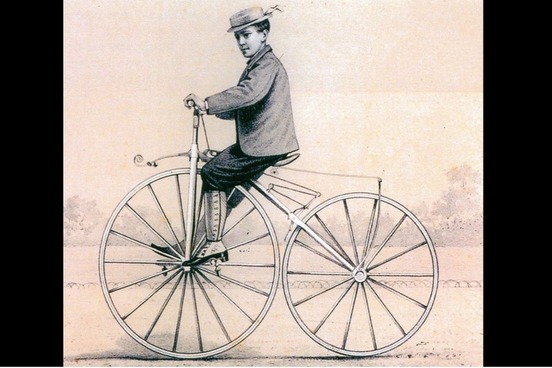 Definition: a lightweight wheeled vehicle propelled by the rider

The predecessor of the pedal bicycle was a two-wheeled vehicle that was propelled with the feet while seated. It was patented in 1818 in Germany, and its name, Laufmaschine, (“running machine”) was translated into French as vélocipède (from the Latin roots meaning “swift” and “foot”). In English, this contraption was known as the dandy horse or the hobbyhorse.

Velocipede became a term for any wheeled vehicle propelled by the rider in English, including early bicycles. In French, it became the term used for the improved pedal-powered version designed in the mid-1800s. This was shortened to vélo to become their modern word for "bicycle."

The pedal velocipedes were nicknamed boneshakers because they were made with wooden wheels and iron frames. After the introduction of rubber tires, boneshaker became a slang term for an uncomfortable or outmoded bicycle.

The veloc- of velocipede is also the root of velocity. 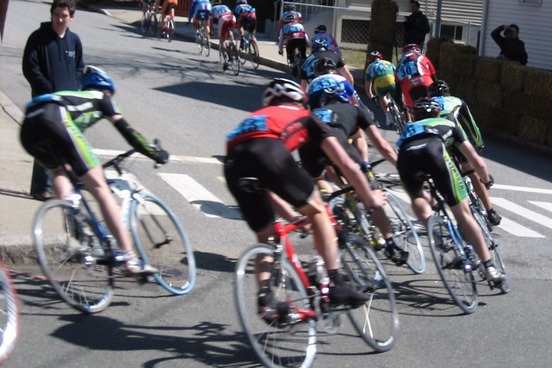 Definition: a bicycle race of a specified number of laps on a closed course over public roads closed to normal traffic

If criterium seems like a funny way to spell criterion, that’s because, in a way, it is—both words share the same root. In racing, criterium means “a bicycle race of a specified number of laps on a closed course over public roads closed to normal traffic.” Often this is a loop around a town square or some other central location. This allows fans to see riders pass on every lap—not possible with road races. A commentary is often broadcast over loudspeakers, often including announcements for special prizes during the race for winners of an individual lap, known as primes (pronounced PREEMS), from the French word for “bonus.”

Criterion means “a standard on which a judgment or decision may be based,” and entered English in the 1600s from Greek. Criterium comes from French: critérium is a word meaning “competition” or “sporting event that classifies or eliminates competitors.” It was first used in English in 1970. 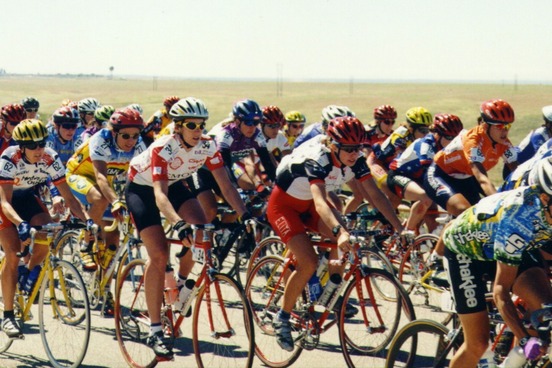 A word that was borrowed twice from French

Definition: the main body of riders in a bicycle race

Riders in competitive races move in flocks for a reason: the front riders break the wind and those behind don’t have to work so hard to keep up. As they rotate, this allows for a much higher average speed for the group. A lone rider would quickly become exhausted trying to maintain a similar pace. They have to stay very close together for this to work well, and good riders know how to hold a very straight line and not wobble slightly to the right and left, as most recreational riders do.

In French, this group is called the peloton, and that word has become the English term as well. It came into English with the meaning “the main body of riders in a bicycle race” in the mid-20th century, but the French word was originally less specific; it meant simply “a group of people” and then “a group of soldiers.” This was the meaning that was first borrowed into English in the 1500s, when it was slightly altered as platoon. Thus, the same French word was borrowed twice into English, with different meanings and spellings.

Peloton was used of the main group of riders in a horse race before it was transferred to cycling. 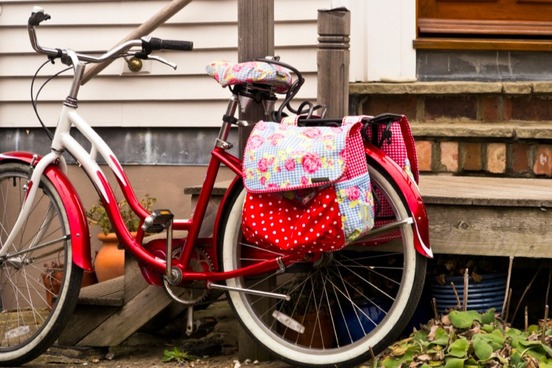 Definition: one of a pair of packs or baskets hung over the rear wheel of a vehicle

Baskets placed on both sides of animals such as horses, camels, and llamas for carrying things were called panniers since the 1600s, and were later adapted for bicycles. Pannier initially was just a synonym of basket in English, borrowed from the French word meaning “bread basket” (the first syllable comes from the French word pain, meaning “bread”). The word’s specific use referring to carrying things on a bicycle dates from the 1930s, but it wasn’t until the 1970s that the modern touring bags usually made out of waterproof nylon and made to attach to a frame fastened above the rear wheel became available, along with handlebar bags. 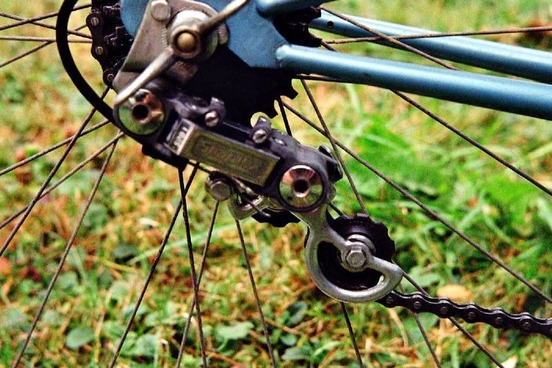 Definition: a mechanism for shifting gears on a bicycle that operates by moving the chain from one set of exposed gears to another

The ability to change gears on a bicycle was a major innovation for touring and racing. Initially two-speed bikes were invented in the early 1900s, and multiple gears were introduced in the Tour de France in 1937. (Prior to that time, the rear wheel had to be changed for a different gear to be used for uphill or downhill riding.)

Derailleur (pronounced dih-RAIL-er) means “a mechanism for shifting gears on a bicycle that operates by moving the chain from one set of exposed gears to another.” The large gear or gears connected to the crankshafts and pedals are called chainrings and the smaller gears mounted on the hub of the rear wheel are called sprockets, which together form a cogset. Levers connected by wire from the frame or handlebars of the bike control the shifting.

Derailleur comes from the French word that literally means “to derail,” as in a train from its tracks. In French it’s pronounced day-rah-yuhr. 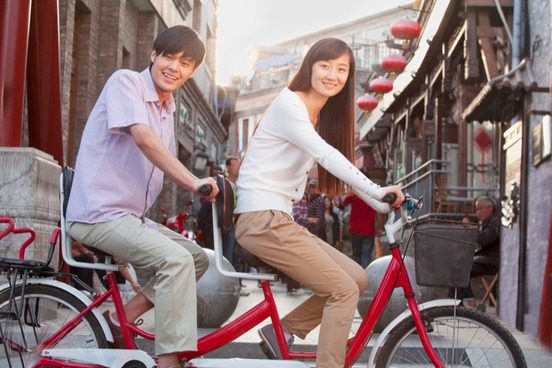 Definition: a bicycle for two or more persons on which the riders sit one behind another

Tandem is used as an adverb that means “one after or behind another,” and, appropriately enough, usually occurs following the word it modifies, as in “to ride tandem.” It is also used as an adjective, as in “tandem skydiving” or “tandem parking spaces.” In tandem means “working or happening together.” Tandem comes from the Latin word that means “at length” or “at last”—terms that relate to time and not physical dimension; the word was adopted for the carriage as a pun to mean “lengthwise.” 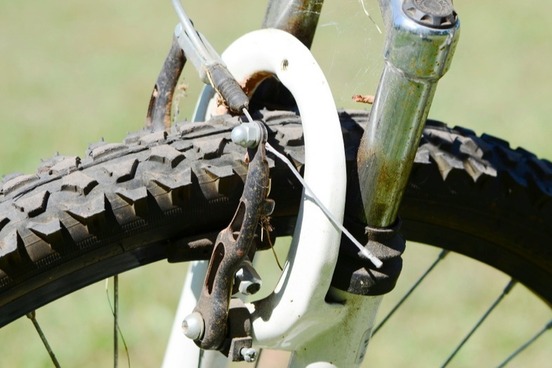 Definition: a device for pressing a frictional material (as a brake pad) against the sides of a rotating wheel or disc

Early bicycles had only one gear, so stopping could come from backpedaling, but some early bikes also had “spoon brakes” of curved metal that pushed directly on the tire tread. The first caliper brake was used for the small rear wheel of penny-farthing bicycles in the 1880s. The caliper consisted of two small metal arms joined at one end and open at the other; the open ends could close or pinch toward each other and apply friction to the sides of the tire or wheel.

Caliper originally meant “a tool that has two narrow legs which can be adjusted to measure the thickness or width of something.” This use dates to the 1500s and the tool resembled a compass used for geometry. The term caliper brake dates to 1904 according to the Oxford English Dictionary.

Caliper is etymologically almost identical to caliber, meaning “the diameter of a bullet,” named for the instrument used for measuring the caliber of a bullet. Caliper came directly from Spanish into English, but caliber traces back through French and Old Italian to the Arabic word qālib meaning “shoemaker’s last”—a tool used for measuring. 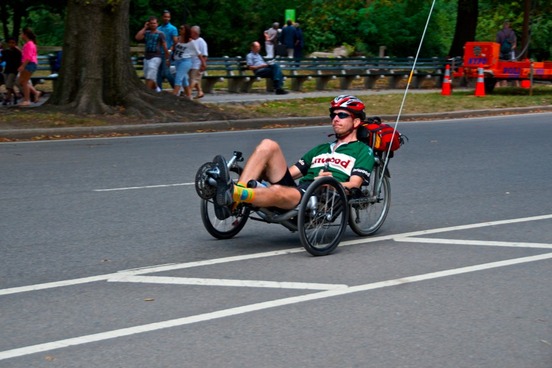 Definition: a bike ridden while (almost) lying down

A recumbent bicycle is one that is ridden while seated leaning back or nearly lying down. The bike is usually lower to the ground, and provides ergonomic advantages by distributing the rider’s weight more evenly and reducing neck strain. Aerodynamics are also improved, since the bike’s profile is much lower.

Recumbent comes from the Latin verb recumbere, which means “to lie back” or “to recline.” The related word incumbere, meaning “to lie down on,” gave us the English word incumbent, which originally referred to people who held lifetime appointments in the church—since they held the position for life, they were “lying on” on them, which has since become the word meaning “a person who holds a particular office or position.” 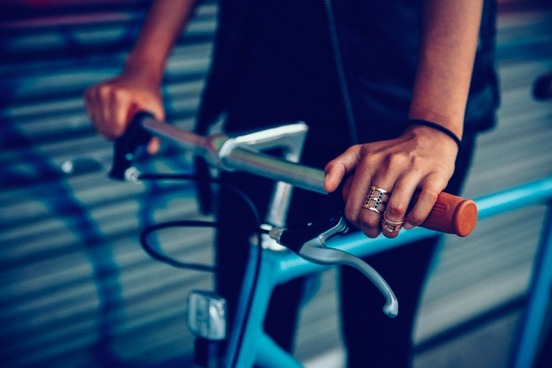 The fixed-gear bicycle has made a comeback, especially in cities, where a simple and light bike, often without caliper brakes, is a durable choice (and where changing gears can be a distraction on city streets).

The term fixed-gear bicycle could be considered a retronym, since at one time all bicycles had only one gear. It has more recently been shortened to fixie, a term that dates to the early 1990s and the slang of New York bike messengers. An early use was found in a 1992 online discussion group, where the suggestion was made that pedestrians who felt menaced by bike couriers could reach out and apply the caliper brake with its handlebar lever, which provoked this exchange:

[You can stop a dangerous bike courier using his front brake.]

A number of couriers in NYC use `fixies' -- fixed-gear bikes with no brakes. I've always thought that was stupid, but maybe now I know why they do it...