Based on the evidence, ‘based on’ is the preferred choice.

The usual preposition used with the verb base has been on or upon for a long time (“based on the novel,” “based upon their research”). In recent decades off or off of has also been used with the same meaning (“based off their experience,” “based off of the book of the same name”), and since this form is newer, it may seem less formal and less correct to some readers. 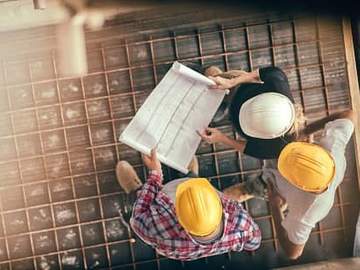 A solid grammatical foundation is key.

When we, your friendly dictionary, make assertions about the language, we base those assertions on evidence.

One might also say that we base those assertions off evidence.

But how about that second version? Does it sound wrong to you?

When the verb base is used with its “to find a foundation or basis for” meaning, it usually pulls a preposition along with it to do the job. Typically and historically, that preposition is on, or somewhat less frequently, upon:

Our modern prophetic idealism is narrow because it has undergone a persistent process of elimination. We must ask for new things because we are not allowed to ask for old things. The whole position is based on this idea that we have got all the good that can be got out of the ideas of the past.
— G.K. Chesterton, What’s Wrong with the World, 1910

But increasingly we are seeing off filling the role on and upon hold:

Diets at the time, for rich and poor alike, were based off the humoral science of the ancient Greeks, which held that unevenness between the body’s four humors—blood, phlegm, choler (yellow bile) and melancholy (black bile)—caused every kind of ailment.
— Michael Snyder, The New York Times Style Magazine, 17 July 2020

Usage of "Based off"

We don’t know why “based off” (often extended to “based off of”) is moving into territory “based on” has occupied since the mid-18th century, but we do know that its use is relatively new. Preliminary research shows it popping up in recorded speech as far back as 1979:

[Coach Jack] Pardee admitted that some of the substituting so far has been based "on guesswork, calculated guesswork," because no one on his staff was certain how the youngsters would hold up under pressure. "How can you tell how a Neal Olkewicz will play?" he asked. "You have a good idea, based off what he did in practice from the start of camp, but until they play, you can't definitely say."
— Paul Attner, The Washington Post, 16 Oct. 1979

The New York Exchange's nearby month is now for May delivery, and during the transition from February, the floor traders "were able to make a market in May based off Chicago's June contract," Mr. Luk [Henry Luk, financial futures specialist] added.
—John Morris, The American Banker, 23 Feb. 1981

Evidence from edited text can be found from right around the same time:

A large group of lenders were persuaded to accept price risk, political risk, completion risk and operating risks, since there were no guarantees from the sponsors and the sale price was based off the world market prices.
— Mining Magazine, November 1981

But if the use strikes you as very new that would make good sense: it’s seen a remarkable increase in popularity in the 21st century. Interestingly, the synonymously used phrase “going off (of)” has followed a similar use trajectory:

To see a room rate well under $200 is a rarity…. The occupancy rate during my stay seemed quite low, going off what I was able to see, with not many guests checking in or out and no crowds in the public spaces, and so social distancing wasn't an issue.
— Paul Oswell, Business Insider, 8 Oct. 2020

The phrase going off (of) evokes the image of moving away from information or an idea that serves as a useful point of departure. It’s likely that “based off (of)” evokes the same image for people who use it.

In truth, though, it doesn’t really matter if “based off” makes logical sense. While there are observable patterns and semantic explanations for many verb-preposition partnerships, there are also plenty of examples for partnerships that resist analysis. We can, for example, drive down a street or up a street and be moving in the same direction, and though we love that people look words up in our dictionary, we don’t really know why English speakers decided that “looking a word up in the dictionary” was preferable to “looking a word in the dictionary,” which was what they’d been saying for centuries.

“Based off (of)” is still rare enough (and new enough) that it’s likely to be noticed by some and to be judged an error. Based on that fact, you might want to avoid it.