The Difference Between Baking and Roasting

Is a half-baked idea really so different from a half-roasted one?

Imagine this: you've just about finished putting dinner together when you realize the pork roast you've had in the oven for almost three hours has been baking at 325˚, not roasting at 325˚. Ack, it's pork roast, you mutter under your breath, not pork bake. You sit down to eat the meal, though, and the pork is the same as it was last time you made it, when you used the "roast" setting. 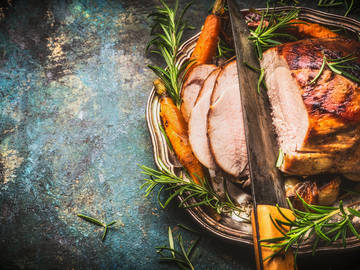 Roasted or baked, you'll get compliments with this.

Hmm, you think: is there actually a difference between roasting and baking?

We don't want to ruin anyone's dinner, but the answer is, well, complicated.

Both roasting and baking involve cooking by dry heat. Both are often done in ovens but can be accomplished by less sophisticated means too. When you're holding that skewered tofu pup over the flames of your campfire, roast is the word you're likely to use, but if you want to put a tin of muffin mix on the grate over your campfire in the morning you'll probably say you've baked (or tried to bake) the inevitably still-doughy masses that result.

Recipes make us think there's a difference, and practically speaking there often is: when we're roasting we're typically using a higher oven temperature than when we're baking, and we're frequently aiming for the crispness and caramelization that results. Cooking is essentially about transformation, and we also tend to use roast and bake to talk about two different kinds of change: we roast firm, structured things (think carrots and whole chickens) to make them softer and less structured, and we bake soft, unstructured things (think brownie batter and bread dough) to make them firm and more structured. But those are only generalizations and exceptions abound. Consider potatoes: we start with firm and structured raw potatoes whether we're baking or roasting them; the baked ones (traditionally hot, whole things to be adorned with butter and sour cream and any number of toppings) come out soft and the roasted ones (traditionally bite-sized morsels to fill out a breakfast plate) have crispy, browned edges where they've been cut.

We contacted a number of oven manufacturers to find out what's actually going on in the ovens in our homes and learned some interesting things. In some ovens the "roast" setting does exactly the same thing as the "bake" setting: 325˚ on roast is indistinguishable from 325˚ on bake, (hence your imagined experience above). In other ovens, the heat comes from one part of the oven during roasting and another part of the oven during baking. Some ovens have no explicit roast option at all; you're always on bake, so if you want to roast you'll use a higher temperature. In other ovens, roasting is only available with convection, in which the hot air is forced to move throughout the oven thereby accelerating the cooking process, while baking can be done with convection or without. In ovens in which "bake" and "roast" mean functionally different things, you are likely to see a difference between cookies baked at 325˚ for 12-15 minutes and cookies roasted at 325˚ for 12-15 minutes. The latter batch is likely to be a bit crisper, to have a little less moisture in it—theoretically anyway.

Modern appliances aside, the distinction between roasting and baking used to be clearer: roasting was done over a fire and baking was done in an oven. A thousand years ago, English speakers were totally clear on that, but not so that one of us would have understood. They were using a now-unrecognizable form of the word bake, and instead of roast they were using the long-obsolete word brede; roast is a relative newcomer, dating only to the 13th century. A century after they started using roast they adopted broil to mean "burn, char." That word now refers to cooking by direct exposure to radiant heat, and in modern ovens involves something like a grill but inside your oven. Instead of the cooking happening by exposing the food to hot air, the food is exposed directly to the heat source.

As with so many language issues, you can rely on your instincts—and your cookbooks—with these terms. There are some foods that are traditionally roasted and others that are traditionally baked, and the terms normally used in each circumstance will sound most familiar. While some ovens make a distinction between roasting and baking, you're probably not going to ruin a meal by choosing the one not mentioned in the recipe. However you roast your roasts or bake your bakes, we wish you good luck.