Spelling out the difference

The spellings ax and axe are both correct, but axe is more common, both in the US and elsewhere. 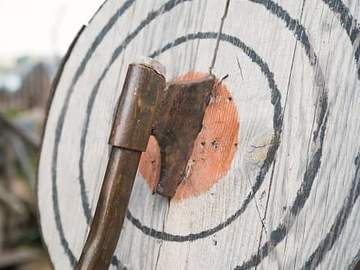 Just throwing it out there.

Both ax and axe refer to the long-handled tool with the heavy metal blade, and both axe and ax feature in figurative use in phrases like “ax/axe to grind” and “take an ax/axe to (something).” Both ax and axe are also used as verbs for actions in which an ax/axe is literally or figuratively applied.

The Historical Usage of 'Ax'

If Noah Webster had had his way, the spelling divide would have been as it is with color and colour, theater and theatre, and draft and draught: he defined ax in his 1828 An American Dictionary of the English Language and included the note “improperly written as axe.” This was in direct defiance of Samuel Johnson’s 1755 A Dictionary of the English Language, which wasted no ink on the shorter form but included only axe.

Webster favored spellings that more closely reflected pronunciation, and if they were backed by etymology, so much the better. Ax had both going for it: the “e” on axe doesn’t do a thing, and none of the word’s ancestors—not Old English æcs, the Old High German ackus, Latin ascia , or really even Greek axinē argue well for axe as a spelling that’s truer to the word’s ancestry.

Despite Noah Webster’s firm conviction on the matter, axe has prevailed as the dominant spelling for most of the years since he deemed the spelling improper. Ax had some good years in the late 20th century, but evidence from multiple corpora shows that axe has once again taken the lead as the 21st century makes its way through its third decade.

Some major publications in the US do prefer the shorter spelling: the Associated Press, Time, and The New York Times all favor ax over axe. But the longer form prevails overall.

It’s rarely possible to determine exactly why one spelling variant becomes more or less popular, but any time a particular spelling gets a cultural boost people encounter that spelling more frequently and it starts to look more and more like the “right” spelling—just as iz for is looks super strange (Noah Webster also lost that battle), so ax for axe starts to look a bit off when you see axe used prominently. Ax was going strong in the 1980s and 1990s, but in 1993 the movie So I Married an Axe Murderer featured the longer variant in its title. And in 2002, Unilever started selling Axe body spray in the US. We’ll never know exactly to what degree these two cultural phenomena influenced the word’s spelling, but it’s likely they had some effect.

Whatever the reason, these days if you have such an item to grind, you’ll call it an axe if you prefer to go with the more common spelling and an ax if you prefer to buck trends while you’re grinding your axes.