A tale of two spellings

Both aluminum and aluminium have a long history of use referring to the metallic element (commonly used as foil to cover food). They both date to the early 19th century, stemming from the word alumina. Aluminum became preferred in the United States and Canada, while aluminium became favored throughout the rest of the English-speaking world.

Why is that? Your dictionary is here to answer that question. 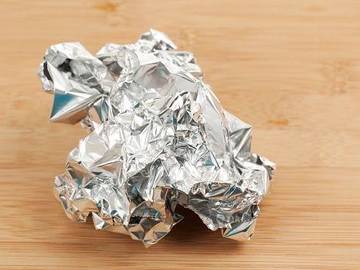 And to give you something to read while your leftovers heat up.

Although the substance aluminum (as we say in the U.S.) is the most abundant of all the metallic elements in the Earth's crust, it does not occur in metallic form in nature; instead it exists in compounds found in almost all rocks as well as in plants and animals. The word alumina, which refers to an oxide of aluminum, has been in use since as far back as 1790, but we didn't start referring to the element itself until a few years later. That's when a British chemist named Sir Humphry Davy came on the lexical scene. The following is from his Electrochemical Researches of the Decomposition of the Earths, read before the Royal Society on June 30, 1808:

Had I been so fortunate as to have obtained more certain evidences on this subject, and to have procured the metallic substances I was in search of, I should have proposed for them the names silicium, alumium, zirconium, and glucium.

That's right: Davy didn't call it by either of the names we use today. He instead used the term alumium (and only in the theoretical), a perfectly reasonable coinage from the Latin alumina with a nice -ium on the end.

In some other universe the story of the word ends there. But it seems that Davy had a change of heart—and perhaps right away. The Oxford English Dictionary reports that in a lecture he delivered in 1809 and published in 1810, Davy does not use the term alumium, but refers only to good old alumina as alumine. By 1812, Davy had revised his coinage, opting instead for aluminum. But the previous year another scientist, in a review of another Davy lecture, had coined aluminium, with the nice -ium that was so familiar in potassium and sodium (which, incidentally, Davy had also coined).

Noah Webster, in his 1828 An American Dictionary of the English Language, defined aluminum as "The name given to the supposed metallic base of alumina." By the time of the 1909 Webster's New International Dictionary, both aluminum and aluminium were noted at the word's entry, and the following note was included:

In the 1934 Webster's Second International Dictionary, aluminium was noted as being "especially British," and the last line of that note had been revised:

The American Chemical Society (ACS) officially adopted aluminum in 1925, but in 1990 The International Union of Pure and Applied Chemistry (IUPAC) accepted aluminium as the international standard.

And so we land today: with aluminum used by the English speakers of North America, and aluminium used everywhere else. Wrap your food and protect your head accordingly.