The seasons are common nouns, not proper nouns, so they are not usually capitalized. They should be capitalized when they are the first word of a sentence or in titles, and in cases where they are being personified, as in poetry. 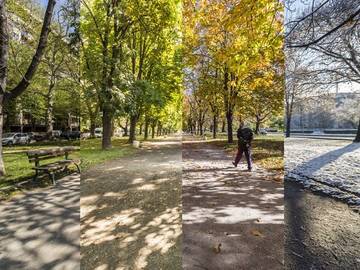 The seasons come, the seasons go, and the question remains: do you capitalize them?

In most cases, no. The names of the seasons—spring, summer, fall or autumn, and winter—are not proper nouns, so they only get capitalized when other common nouns get capitalized. For example, a student would write "I'm taking a linguistics class in the spring" or "I took the class in fall 2019," but a list of available classes might be under a title heading of "Spring 2020 Linguistics Classes." Season names are of course capitalized at the beginning of sentences too, as in "Spring arrives in March."

Given that the names of the days of the week and months of the year are capitalized, this advice can feel counterintuitive. Let's dig in deeper, then, with some examples. Here we have season common nouns being simply the uncapitalized common nouns English meant them to be:

Harry the Dog and Mabel the Cat were chatting when Harry introduced a concerning topic. "A bear," he said, "violently dismantled my bird feeder this past spring."

Mabel's reply was somewhat harsh. "Fool! Don't you know better than to leave your bird feeder up past late winter?"

In titles, common nouns—including the nouns that refer to the seasons—get capitalized:

Harry chose to ignore Mabel's tone. "Interestingly enough, the bear left a book behind: John Steinbeck's The Winter of our Discontent, which, as I'm sure you know, takes its title from Shakespeare's King Richard III, in which Gloucester says, 'Now is the winter of our discontent / Made glorious summer by this sun of York…'

"Oh, that is interesting," Mabel concurred, feeling less truculent. "Bears can be funny. I once heard one yell 'The best song in Grease is "Summer Nights," don't @ me.'"

The names of the seasons can also be capitalized when they're personified—that is, being treated like beings:

"How strange!" said Harry. "All the bears I've known have been very dismissive of 20th century film—especially musicals. One lovely fall day I heard one reciting the opening to Shelley's 'Ode to the West Wind,' which in my experience is behavior more typical of the ursine: 'O wild West Wind, thou breath of Autumn's being, / Thou, from whose unseen presence the leaves dead / Are driven, like ghosts from an enchanter fleeing.'"

"Ah, poor dear," sighed Mabel. "Sounds like someone was feeling some ambivalence about hibernation, which is understandable. I do feel that the winter season can be both brutal and invigorating."

Bears and our friends aside, the takeaway here is this: don't capitalize the names of the seasons unless they're 1) at the beginning of a sentence, 2) in a title or a heading, or 3) being personified.