When a sentence is in the active voice, the subject of the sentence is the one doing the action expressed by the verb. In the passive voice, the subject is the person or thing acted on or affected by the verb's action. The passive voice is typically formed with a form of the verb be—such as is, was, or has been—and the past participle of the verb, as in "The ball was thrown by Jerry." Although sometimes criticized for being evasive, the passive voice can be useful when someone wants to emphasize an action that has taken place or when the agent of an action is unknown, as is often the case in news coverage. 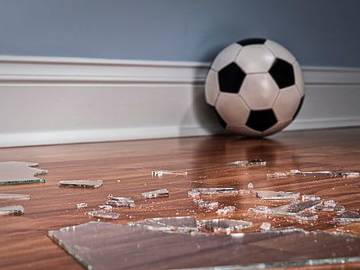 In English class, we are taught the difference between active and passive voice.

The passive voice makes the subject the person or thing acted on or affected by the action represented by the verb.

Passive voice: The lamp was knocked over by Jerry.

Both sentences describe the same action taking place—Jerry making contact with a lamp and causing it to fall over—with the first sentence making Jerry the subject and the second making the lamp the subject.

The passive voice is often distinguished by its use of a linking verb form (e.g., was, had been) followed by another verb in its past participle form (e.g., "I have been given an opportunity").

Passive voice often gets criticized as a weak and evasive form of expression. But it is useful for those instances when you want to emphasize the fact of an action having taken place rather than who performed the action. It is also helpful for instances when the doer of an action (also known as the agent) is unknown.

(There is also the mediopassive voice, which is a whole other animal that we discuss in this article.)

The differences between active and passive voice come up as a subject for discussion in criticism of news coverage. When news media reports on incidents of crime, for example, they will often use headlines that feature the passive voice: “Man (Is) Attacked on Elm Street” instead of “Person Attacks Man on Elm Street.”

The passive voice allows for a shorter headline, but more pertinently, it puts up front information that is known. In many cases, especially in stories involving crime, the fact of the crime being committed, and whom it was committed against, is known before who committed it becomes clear.

The reason for the passive is therefore practical: one might not know who carried out the attack, only that someone did, and that the attacker might still be at large. Even once an attacker has been identified, news writers might avoid the active voice for fear of stating what that person is accused of as fact. (Hence, “Arrest Made in Elm Street Attack.”)

The passive voice gets called out on occasion as a tool for expressing the avoidance of responsibility, like when one says “Mistakes were made” rather than “We made some mistakes.” Sometimes, as in our Elm Street example, it is criticized for placing what appears to be a burden of responsibility on the person who receives the action (i.e., the victim) rather than the person who performs it.

There are other instances that technically count as active voice but nonetheless use language that dissociates the performer from the action being performed.

“The lamp fell over” is active voice, but it feels like a passive statement because there is no obvious causative agent like Jerry in “Jerry knocked over the lamp.”

This occurs in news writing as well. A sentence like “a rock shattered the store’s window” is phrased in active voice—the subject is rock, the verb is shatter, and the object is window—though it might be derided as elusive because it avoids the question of who was the agent who propelled the rock that broke the glass.